Demi Lovato to her fans: "Thank you guys for keeping me feel loved and making me stay strong." 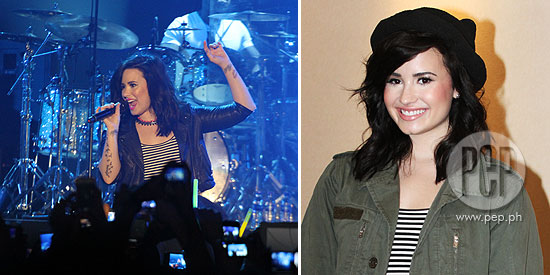 Demi Lovato expressed gratitude for her fans at the Smart Araneta Coliseum where she staged a successful concert last March 20.

The 20-year-old American singer became popular after being a part of Disney's television film, Camp Rock, in 2008.

PEP.ph (Philippine Entertainment Portal) and other members of the press had a chance to interview Demi earlier that day at Gateway Suites.

When asked what fans could expect from her concert, Demi matter-of-factly replied, “Uhm, they can expect a show. They can expect me playing my music.”

Demi is especially thrilled about being in a different side of the world and still have people who recognize her music.

She admitted, “It feels really, really great. It’s kinda crazy not to realize how far away from home you are until you fly so far and then I talk to like, my family at home and the time difference is so crazy.

“So realizing that I’m on the other side of the world and still have fans is like really insane and really amazing.

“And it’s something that I just can’t really fathom but I try and it’s a really incredible feeling.

“And so I’m really excited to be here and say ‘hi’ to that fans that I’ve never seen before and play my music for them. I think it’s gonna be a really good time.”

THE CONCERT. Demi’s performance started at around 9pm after front act Khalil Ramos had energized the crowd with “Don’t Wanna Miss A Thing,” “Now We’re Together,” and “Kung Ako Ba Siya.”

Demi started off her set with upbeat tunes “Unbroken, “Get Back,” and “Here We Go Again,” and “La La Land.”

She then mellowed it down with “Don’t Forget,” and “Love Like A Star.”

She then introduced her next song: “One of my favorite things about playing live shows is that I get to sing you guys some of my personal favorite songs and are my own.

She proceeded to sing “The House That Built Me” (2010) originally performed by Miranda Lambert.

In between her performances, bouncers would admonish excited fans who stood up in their seats.

As her triumphant fans stormed close to the stage, Demi continued her spiel, “One of my favorite things about making music is that I get to put my personal experiences into my songs.

“And that’s what I did on this last song. It’s about a heartbreak. So if any of you guys are going through a heartbreak right now. Just know that this is for you.”

She than sang “Fix A Heart,” and followed it up with “Catch Me.”

Then Demi asked the audience: “Will you guys do me a favor?

“On this next song, will you guys put your glow sticks or your camera phones or your phones, anything that lights up and put it up in the air so I can see you guys tonight?

“There’s nothing more beautiful than looking out in the audience and seeing it light up with you guys.”

Her fans sang along to “Lightweight.”

As her concert was nearing its end, Demi gave a message to her fans, who call themselves Lovatics:

“I’ve been through quite a lot and you guys have supported me through it.

“But it makes me wanna show you guys that if there’s anybody in the audience that’s struggling from an eating disorder, bullying, self harm, substance abuse, I just want you to know that you can get through it if you ask for help.

“Cause it doesn’t mean that you’re weak. I asked for help and I got it and now I’m sitting here on this stage.

“Thank you guys for keeping me feel loved and making me stay strong.”

Then Demi performed her 2011 hit, “Skyscraper.”

For the next song, she told the audience, “I want to see everybody up on their feet!”

And the crowd danced to Demi’s version of Chris Brown’s 2003 hit single, “Turn Up The Music.”

She then proceeded with a rousing performance of “Remember December.”

Demi thanked her fans, declared that she can’t wait to get back to the Philippines again, and bid her audience goodbye.

But chants of “WE WANT MORE!” and “DE-MI! DE-MI!” prompted the singer to come back on stage and perform “Give Your Heart A Break,” ending her show on a high note.

Stars spotted at the concert were Alex Gonzaga, Zoren Legaspi with his twins Cassie and Mavi, and celebrity daughters, Julia and Claudia Barretto with Richard Gomez and Lucy Torres’ daughter Juliana.