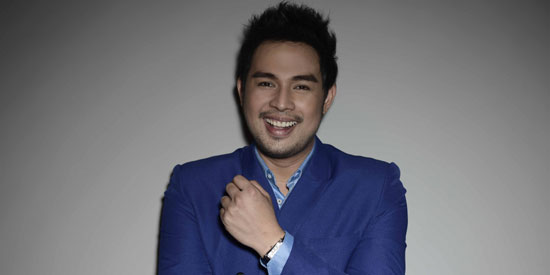 Jed Madela may have done numerous performances on stage but the professional singer admits he still get nervous every time he needs to sing in front of an audience.

“Every performance is always a challenge for me,” the 32-year-old recording artist stated in an interview with PEP.ph (Philippine Entertainment Portal) recently.

For someone who started his singing career by joining different competitions, Jed has a lot to share to newbies about getting jitters before an event.

Jed said that this kind of feeling may affect someone’s performance, “lalo na kung at the back of your mind, naiisip mo na contest ‘yon.

“Ang daming mong maiisip that will add to your nerves.”

So to avoid getting distracted, the Kapamilya singer would like to remind newcomers, “There’s a reason why you’re there. It means you’re good. It means you have something to show.

DON’T TAKE MISTAKE TOO SERIOUSLY. Jed did not deny that despite his experiences, he still sometimes gets worried about his performance. This time, however, it’s usually because of the expectations of the people around him.

He related to PEP a usual scene during his regular gig on the weekly musical variety show ASAP, “Before I go on stage, ninenerbiyos ako ng todong-todo, as in nginig na nerbiyos ha.

But the singer admitted he still makes mistakes while singing.

How does Jed get away with it?

“Siguro experience na rin has given me a lot of lessons.”

HALL OF FAMER. In July, Jed will be in America to receive the 2013 Achievement Award from World Championships of Performing Arts (WCOPA), which will officially make him part of the Performing Arts Hall of Fame.

Initially, Jed doubted getting such award.

But as he looked back on his performance in WCOPA IN 2005, when he became the first Filipino grand champion in senior division, the balladeer thought it could be possible.

“Siguro it’s a plus thing din for them to induct me in the hall of fame.”

Even after winning, Jed has actively participated in the so-called international “talent olympics.”

“You know, I’ve been going back and forth din sa U.S., joining the world championship to judge and to look for new talents.

Since he already got this kind of recognition, Jed thought he has to stop joining singing contests.

According to Jed, the next step would be, “Moving on to the next level of me being the person behind these competitions—I can be a judge, a mentor or a consultant.”

He also said in conclusion, “Siguro sa mga pinagdaanan ko in performing, kahit papaano alam ko na ‘yong tricks of the trade on how to perform, how to be on stage, how to prepare for a performance. Siguro nandoon na ako sa ganung level.”