Eraserheads reunite for a show at the Dubai Amphitheatre, UAE 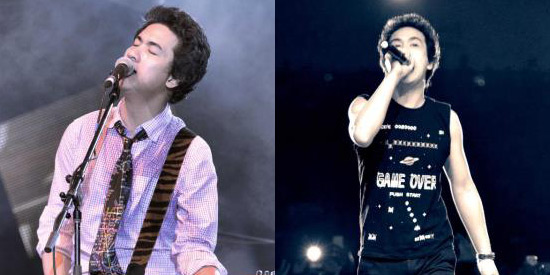 DUBAI—Six months after the success of their U.S. tour, the Eraserheads assembled once more to bring their reunion show to the United Arab Emirates—a country where more than 650,000 Filipino expatriates and families are living.

As it turned out, April 4 (Thursday) became an evening where Pinoys from all over the UAE and neighboring Gulf countries converged at the Dubai Media City Amphitheatre to celebrate world-class Filipino music.

The Eraserheads did not disappoint.

“Walang Nagbago” kicked off the evening, instantly sending the crowd into an early frenzy with the sight of the local fab four, whose music defined and reshaped the OPM landscape in the 90s, and ushered in a new generation of local musicians.

The lyrics “at ngayong may edad ka na / at lunod sa problema / nangangarap na ibalik ang kahapon…” sounded poignant especially to those who grew up in the '90s and now found themselves toiling hard in a foreign land to fulfill obligations back home.

The Dubai crowd was noticeably tamer as compared to the over-enthusiastic U.S.-based audiences that greeted the band during their North America visit.

Ely had to egg the crowd from time to time to turn up the noise meter. On numerous occasions, the enigmatic frontman solicited audience participation by letting the people sing—an effective exercise particularly when it comes to the familiar tunes such as “Overdrive,” “With A Smile,” “Torpedo” and “Magasin.”

Although the setlist that evening was predominantly made up of recognizable singles, the Eraserheads dished out seldom played Cutterpillow gems such as “Poorman’s Grave,” “Waiting For The Bus” and a surprising performance of the noisy yet groovy-melodic “Paru-Parong Ningning.”

Ely fittingly dedicated “Lightyears” to all OFWs in attendance. The track, taken from the band’s Christmas album, Fruitcake, talks about homesickness (“if I only have a rocket ship to fly / I’ll be there right in a minute”) and uncertainty in dealing with life’s changes.

Before playing the infectious “Super Proxy,” Raimund reminisced by telling the crowd about the band’s 1999 Dubai gig together with the late great rapper, Francis Magalona.

Rounding up the band’s set was the classic hit “Ang Huling El Bimbo”—the song that earned the band the MTV Asia Viewer’s Choice award in 1997.

The Eraserheads returned onstage to do an encore, playing certified sing-along favorites “Pare Ko” and “Toyang. Ely (this time wearing a casual black sleeveless shirt much to the delight of the ladies) momentarily abandoned the guitar to interact with audience members stationed near the stage.

The band enlisted anew the services of session guitarist-producer and longtime friend Romel “Sancho” Sanchez to enrich the overall sound of the songs. Ely introduced his former housemate and Wanted: Bedspacer collaborator as the “fifth Eraserhead.”

As a live unit, the Eraserheads sounded tighter and sharper than before. All four members looked genuinely happy and comfortable playing again with each other, and the good vibes translated effortlessly into the entire performance. Ely, to his credit, has become more engaging onstage and his voice sounded superb from the opening until the final number.

Twenty-seven songs taken from the band’s vast catalogue of hits left the audience thrilled, satisfied and raring to hear more.


More importantly, the songs—even for a single night—made every Filipino present at the Dubai Media City Amphitheatre feel as if they’re back home.

Waiting For The Bus