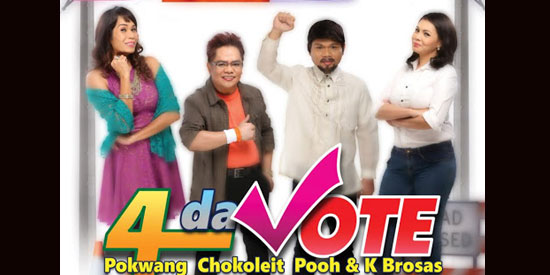 While 4 Da Vote showcases entertaining and funny satirical sketches, much of the credit should be given to the four stars of the show for their unquestionable talent in comedy and live performing. This show is topbilled by Pokwang, Chokoleit, Pooh, and K Brosas.

Bring four of the best comedy actors together in one show filled with music, and funny antics and satire about the election season— and expect no dull moment in a highly entertaining show that will tickle your funnybone even when it's over.

That’s exactly what the 4 Da Vote Concert— starring Pokwang, Pooh, K Brosas and Chokoleit— is all about, thanks to these four big names in live comedy.

The comedy-musical satire is a four-night show: April 19-20 and April 26-27 at the Music Museum in Greenhills, San Juan.

While the four of them are quite visible in their respective projects, they are considered veterans when it comes to performing, a la comedy bar. So, apart from the good script, expect a lot of spur-of-the-moment comments and adlibs that only lend more flavor to the show.

Surprisingly, the concert becomes more interesting because of the intelligent parodies that do not focus on election alone.

It also tackles socially relevant subjects, such as “the other woman” and biases about physical beauty.

Serious subjects tackled are masked in funny or humorous skits.

Live performance is unquestionably one of their biggest strengths and the fact that they are all friends only makes their “fooling around” seem very natural, thus making the show effective.

In this situation, quantity is as equally important as the quality. While they are all very good comedians, one of them could be counted on saving a skit from lagging when one of them would occasionally make a poor or not-so-amusing joke.

Apart from their comic strengths, the four performers also showcase their singing talents; making a good show with a good mixture of music and funny and entertaining sketches.

Given that election is a very serious matter, 4 Da Vote is a welcome breather that offers a good laugh even just for a moment. At the same time, it effectively reminds us that each of our vote counts and it should be taken seriously.