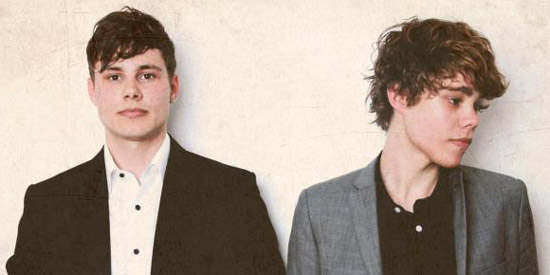 Australia has such a unique charm and personality, it has prompted popular daytime TV host Ellen deGeneres to exclaim (after filming a week's worth of episodes in Australia) "I can see us living here one day, it's so beautiful...I'm glad I married one of you.” Ellen has been married to an Aussie, former Ally McBeal star Portia de Rossi since 2008.

This May 18, at Wanderland 2013, some more Australians will find their way to Philippine shores so Pinoyss can appreciate the wonderful and totally Oz sound these talented Aussies will bring.

One duo, named Colour Coding, is made up of cousins Tim Commandeur and Chris Holland. Since they were young kids growing up in Queensland, the two have nurtured a mutual passion for music and songwriting.

Their family tie is through their mothers, so does it add any advantage to their partnership that they are cousins? In a recent interview with PEP.ph (Philippine Entertainment Portal), Chris admitted: "The advantage is that we know each other so well, if there is anything we don't agree with, we can just tell each other and not get in a fight about it."

"Disadadvantages, I don't know, I can't think of any, it's mainly a positive relationship," Chris shares.

Sharing music as a passion is one thing, but what pushed the two to make a career out of it? Chris says, "we used to play in a previous band together called Operator Please." The band was originally formed by lead singer Amandah Wilkinson in an attempt to compete in her high school's annual Battle of the Bands. Operator Please is made up of five youngsters from the Gold Coast of Queensland, and is classified under pop music.

Because of Operator Please, Tim and Chris experienced a lot together: writing, recording, touring extensively (both overseas and around Australia) as they got to play at some of the world's most renowned venues and festivals.

"When that band decided to go on hiatus, we decided we wanted to make music together," Chris tells us, a realization of their lifelong ambition to form a band of their own. Tim and Chris were no longer naive teenagers, recording an EP in Tim's father's studio, instead they were going into the music scene with eyes wide open, bearing the Australian chart-topping success of Operator Please hits and singles with them.

So why pick a name like Colour Coding? In the exclusive phone interview, PEP.ph points out that color coding (spelled differently) has another meaning in the Philippines since it refers to a traffic scheme used on the streets of Metro Manila. Chris says that in Australia, it simply means color matching and then goes on to explain the origin of their duo name.

"Colour Coding is the title of a song that we really like from Dappled Cities, because when we were in our previous band, they were the first to take us on tour, it just has a bit of a sentimental value to it," Chris explained. Dappled Cities is a five-piece indie rock band from Sydney and the Colour Coding lyrics partly goes like this: "But in your house, we gave our fantasies, exchanged for currency, a valid colour code to blanket our natural feelings."

With such enigmatic yet truth-baring lyrics to drive them forward, the two boys honed their writing and composing skills, and by September 2011 as Colour Coding, released their self-produced debut EP Proof. They had great minds working on that as DnR Music, the company that mixed their EP, also did work with world-famous singers Gwen Stefani, Madonna, Oasis, to name a few. They released songs like Perfect and Hold Tight, the latter to showcase the duo's more dancy, pop influences.

Wanderland 2013 will be the first time that Tim and Chris as Colour Coding will perform in an international show. Wanderland is an annual outdoor music and arts festival, to be held the whole day of May 18, 2013 at Globe Circuit Events Ground in Makati City.

This will also be the first major concert for the new venue and brings together the hottest foreign and local indie pop, indie rock bands and up-and-comers on one stage. Headlining the music festival is Australian five-piece outfit The Temper Trap, best known for upbeat joyride tracks Sweet Disposition, Fader and Need Your Love.

Chris says that it's interesting to have their first international show in the Philippines, and that it works "because something in our music resonates with the kids over there and we have just have an incredible amount of support from fans in the Philippines, so we thought, why not?" Chris reveals that their song line-up for Wanderland will consist of songs from their EP Proof, including a cover of a song by The Killers and two new songs: "Yours Not Mine" and "Hanging On."

Seems like the two new songs are love themed, and Chris points out, "I suppose they are!" with a throaty chuckle. Chris wrote the two songs and says he was inspired by "musically, we are just looking to further develop our sound and it's a bit more of a bigger, more anthemic sound I suppose."

Having spent time with The Temper Trap, Chris says that "we're good friends, so we get a lot of influences from them [musically], but we try to put our own spin on it."

When asked to name the bands and singers that inspire or influence Colour Coding, Chris cited: "Foster The People, I know they are big in the Philippines too, as well as bands like Phoenix, a French alternative rock band and The Strokes as well, and other indie bands, including an Australian band Empire of The Sun."

Chris reveals that the bands mentioned above are on a loop on his music playlist, aside from "folk music, old people like Bob Dylan, The Beatles, all of that kind of old stuff that I really like. And hip hop music, I listen to quite a large variety of music."

He adds that songs that make him really happy, enough to be called eargasms, are "songs that when you first hear it, you have to wait till the very end, if you're driving in a car, you wait till the end of the song till you get out coz you can't stop listening to it."

Does he have any specific expectations of meeting Filipino fans or performing in fornt of them? "I really have no idea what to expect, I hope it's not too bad, I know that the fans seem to be kinda widespread throughout the Philippines so I hope that they would be concentrated in Manila though," Chris admits. "I just get excited, butterflies in my stomach, and I try and visualize the show," Chris says that these are what will mostly be running through his head the night before Wanderland kicks off.

Considering that the music festival is only one day, have the boys factored in some R&R time before or after to soak up the sights of the Philippines? Sadly, Chris says, "we don't have a lot of time, mainly just in Manila so we will try to cram as much culture and food and stuff into when we're there."

Is there any Filipino delicacy like balut, adobo, kare-kare or kakanin that the duo will try? Chris sheepishly reveals, "I really don't know what to expect but Tim and I are big food lovers so we're just gonna try out whatever and see as much as we can see."

What does Chris hope to take away from Colour Coding performing at Wanderland? Chris quickly answers, "I'm just super excited to be traveling again for music because we got to do it so much in our previous band, traveling to Asia, Europe, but we never actually made it to the Philippines then so it's gonna be a whole new experience and we look forward to enjoying some of the Philippine culture as well."

So why should music lovers head out to see Colour Coding this May? "If you want to listen to some fun, upbeat, sunny music, check us out," Chris declares wholeheartedly, and that sounds like the perfect way to celebrate a sizzling-hot summer.

Wanderland will have a lot of music to offer: from The Temper Trap to two American alt-rock bands: Neon Trees, who rose to popularity with certified chart-toppers Animal, Everybody Talk and 1983; and Nada Surf, who is responsible for the ‘90s coming-of-age track "Popular," the melancholic Inside of Love and its unforgettable rendition of the new wave anthem If You Leave from the seminal soundtrack of The O.C.

Aside from Colour Coding, other indie-pop goodness comes in the form of New Zealand-based folk group Avalanche City and the female-fronted indie quintet from Melbourne, Tully on Tully.

Philippine bands Up Dharma Down, Taken By Cars, Pulso, Yolanda Moon, and She’s Only Sixteen will also perform on May 18.

Wanderland 2013 should earn a spot on your summer calendar and ups the activity meter by also including rage activities, performances by live art artists Anjo Bolarda x Martojaks, Secret Fresh and Thursday Room, inflatable slides, jousts and a Velcro wall.

Tickets are priced at P4,800 (exclusive of ticket service charge), available at all TicketNet, TicketWorld and SM Tickets outlets. Check out Wanderland.ph and Facebook/Wanderlandfest, Twitter/Wanderlandfest and Instagram/Wanderlandfest. Do not forget to hashtag #KarposWanderland2013.

Wanderland 2013 is presented by Karpos Multimedia Inc., the group behind The Cranberries Live in Manila, We Are The In Crowd, This Century and Set Your Goals, and The Maine Live in Manila.