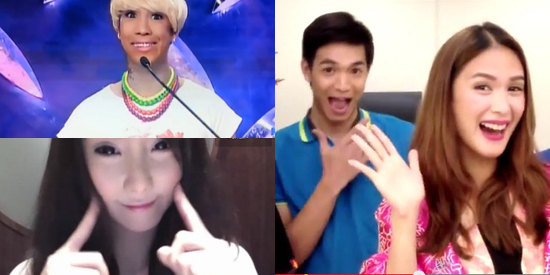 ABS-CBN's noontime show, It's Showtime, used the "Gwiyomi" song on Philippine television. Various Pinoy celebrities uploaded their own version of "Gwiyomi." Some of the most popular Pinoy versions include those created by Alodia Gosiengfiao (lower left) as well as Heart Evangelista and Chris Tiu (right frame).

The Philippines is not exempt from the K-Pop craze happening around the world. From one hit to another, Filipinos are always updated on what’s “in” through the internet.


After Psy's phenomenal "Gangnam Style" broke records on YouTube, there is another K-Pop craze to hit the web: the Gwiyomi Song (귀요미, pronounced as “Kiyomi”).

WHAT IS GWIYOMI? According to GwiyomiMadness.com, “Gwiyomi” or “Kiyomi” is a Korean Internet slang used to refer a “cute person.”

This Internet meme is made popular by Jung Ilhoon of the K-Pop idol group BtoB (acronym for Born to Beat) last year. Ilhoon made a series of hand movements and counted numbers in a “cute way” during the 24th episode of BtoB’s reality show MTV Diary that aired last September 9, 2013 (shown below).

The gesture is then called the “Gwiyomi Player” which is translated to “cute player.” It became the most searched term in South Korea after he performed it and became even more popular after BtoB’s guesting on a South Korean talk show titled Weekly Idol (shown below).

The talk show featured a mini-segment titled “Aegyo Battle” (translated to “Battle of Cuteness”) where idol group members perform their own version of the “Gwiyomi Player.” After being featured on Weekly Idol, the gesture soon became popular among Korean idol group members.

The "Gwiyomi Player" was well received by Korean fans but it wasn’t viral until a Korean indie artist named Hari released the “Gwiyomi” song last February 18, 2013 inspired byJung Ilhoon’s “Gwiyomi Player.” The lyrics of the song describes the feelings of a girl towards her “Oppa” (Korean term used by girls to refer to older guys).

Six days after its release, Jung Ilhoon uploaded his version of the song while doing his hand gestures. This inspired netizens to upload their own versions of the "Gwiyomi" song.

GWIYOMI CRAZE. Soon, "Gwiyomi" entered the Philippine entertainment scene. TV host and comedian Vice Ganda picked up the “Gwiyomi” Song when this song was requested by his fan through his Twitter account.

Caption: I-Bilib hosts Heart Evangelista, Chris Tiu and Moymoy Palaboy also made a video of "Gwiyomi" during their free time.

Another Gwiyomi video that went viral on Facebook is the version by Macky Lopez, also known as Macky Becky. On his video, Macky performed the "Gwiyomi" song while wearing a wig. Towards the end of the song, his father came inside the room and saw him dancing. Macky diverted his dance moves to random movements and awkwardly said, “Nasa labas si Mikay.”