Bamboo Mañalac releases new single "Carousel"; reacts to Sarah Geronimo having a crush on him 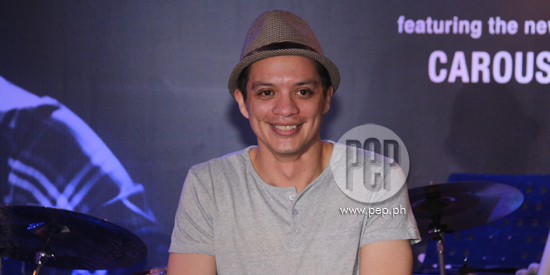 Bamboo Mañalac on possible collaboration with Sarah Geronimo: "We’ll see, we’ll see what happens, sabi ko. If she writes something or I write something, we’ll see kung magkita kami halfway."

Pinoy rockstar Bamboo Mañalac is set to release a repackaged version of his debut album No Water, No Moon with a new single titled "Carousel." The repackaged album will be available in record bars starting May 1, 2013.

During the press launch of the said album last April 24, Bamboo told PEP.ph (Philippine Entertainment Portal) and other members of the press that it’s a special treat for his fans, “Bonus [treat] lang for those who have an album at yung wala pa.”

The award-winning performer revealed that the word “inspiration” sparked ideas for his new single. Bamboo said, “[In] life, we are all inspired and like, everything starts from a point in where in life, ‘pag sa buhay para tayong nagmamadali, e, sa lahat.

“We rush through, to get through life pero at some point, titingin tayo sa likod, e – and then yung mga memories and that what’s made us who we are today.

But why did he release a repackaged album instead of a new one?

“This, sa next album, I always work in batches, so if I were to release an album, mga next year pa, or two years pa tayo matatapos pa. That’s something I wanna complete, e.

SARAH GERONIMO’S CRUSH. Early this month, Sarah Geronimo was asked during the press conference of The Voice of the Philippines how she felt now that she is now working with her previous crush. The Popstar Princess admitted that she “admires” Bamboo and his passion for his craft.

When asked about his reaction to Sarah's statement, Bamboo said, “No, no comment na kami. Sarah...we spent a nice time during our, our blind auditions, medyo masaya kami ‘dun. So, nice chatting with Sarah, it was good. So yun lang. [laughs]”

Bamboo added that his actions towards the Popstar Princess did not change after he found out about her crush on him. “Oh, no. No, no, no. It’s a – very maganda yung, sort of a chemistry namin ng apat na coaches. Kinaklaro ko, ah, apat na coaches.”

Nevertheless, Bamboo is open to possible collaborations with the Popstar Princess.

“So, we’ll see, we’ll see what happens, sabi ko. If she writes something or I write something, we’ll see kung magkita kami halfway.”

EXPERIENCE ON THE VOICE. Aside from his new album, Bamboo is currently busy with his newest project: being a coach in The Voice of the Philippines. Bamboo admitted that he was initially nervous since this is his first time to be a coach. “It ah, it was good. Unang day, alam mo kabahan pa kami, e, di ba? We’ve spent only, bago ng blind auditions, one night lang kaming nagsama ng dinner, so hindi pa enough yun.

Is he open to accepting acting stints in the future? The rockstar admitted that doesn’t see himself acting either on television or in movies. “Hindi, I don’t think so. Gusto kong ginagawa ko, e.

“Ako, I just love music, ah, I know what I’m good at, ito na talaga yung trabaho ko, e, for life. So I don’t see myself acting. [For] me, hindi talaga.