Christian Bautista, Karylle and other singers to interpret Philpop 2013 entries 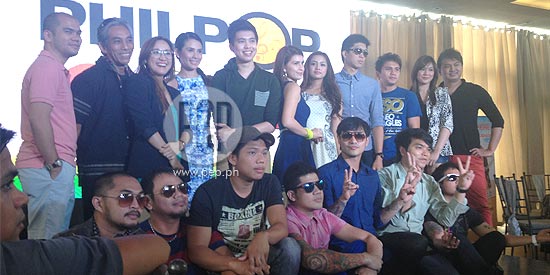 “A song starts with a seed idea like most creative works. How a song blooms into a potential hit or classic is in it a most interesting process,” says Maestro Ryan Cayabyab, Philpop executive director.

During the June 5 launch of Philpop 2013 at Ariatto Function Centre, Quezon City, songwriters and interpreters were introduced to the press. Karylle, Yael Yuzon, Christian Bautista, Tippy Dos Santos, Kean Cipriano and Ney Dimaculangan were among the singers who graced the event.

Cayabyab admits that the choice of interpreters, negotiations with managers and labels, coordinating the recording schedule was stressful. But he was quick to point out: “All the effort was well worth it.”

For a year and half now, Philpop has been actively pushing with its goal of reviving interest in songwriting and composing. This year, Philpop received 3,383 entries not only from Filipinos in the country but all over the world. This year's focus, “Your theme, your genre, your song,” encouraged a lot of Filipinos to write a song limited only by their creativity.

TOP 12 SONG INTERPRETERS. After months of tedious screening and evaluation, the jurors (including Ryan Cayabyab) have shortlisted 12 finalists for the Philpop 2013 Music fest.


These songs will be interpreted by the following artists:

Sitti and Julianne Tarroja for “Pansamantagal” written by Jungee Marcelo

Jose and Wally for “Askal” written by Ganny Brown

PHILPOP NOW OPEN FOR VOTING. Philpop is letting people choose their favorites among the top 12.

Starting June 5, people can start voting via text messaging for the Smart People’s Choice Award. Subscribers can use Smart, Talk and Text and Sun Cellular exclusively to vote for their choices. The winner of this special award will receive P100,000 pesos and a trophy especially created by artist Ramon Orlina.

Text: To vote for:

The grand finals of Philpop 2013 will take place on July 20 at the Meralco Theater.