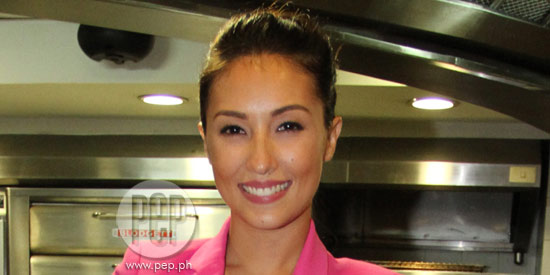 "It girl" Solenn Heussaff is coming out soon with her sophomore album.


She had just wrapped up shooting a segment of her GMA News TV magazine-lifestyle show Taste Buddies when PEP.ph had the chance to interview Solenn.

The actress was on her way to the recording studio of MCA Music to record the fourth song of her album.

Solenn reveals, "This second album is coming out in July in time for my birthday, and ngayon, it's named SOS, which is my nickname..." According to her Twitter account @solennheussaff, the album launch date is set for July 13, 2013.

While her debut album under MCA Music was named Solenn, this second one, aside from being named after her nickname is a play on Sinner or Saint. Solenn adds, "it' a mix of different genres, with 8 originals and dalawang covers."

"That's why it's SOS, kasi yung first Solenn, so yung second, parang mas personal and so since 'Sos' is my nickname since bata pa ako, at ngayon lahat ng mga, like yung mga fans, they all call me 'Sos' now, parang family lang, so it's a more personal album and more, a little piece of me."

Is there any other special reason for releasing SOS in time for her birthday?

Solenn also reveals the kinds of songs listeners should expect, "may dalawang songs written by me, may isa written by Ely Buendia, from Bimbo [Bo Cerrudo] may dalawa na Tagalog tapos I'm working on a song with Kean Cipriano, co-writing the song..."

That is an interesting collaboration, working with Ely Buendia. How did Solenn end up choosing him?

She giggles excitedly, "Ely, actually coz, I met him once tapos he told me, 'I'll write for you, a song for you.' Tapos sabi ko, 'Game!'"

She continues, "who wouldn't actually," on immediately taking Ely on his offer.

Has she gotten to record the song Ely wrote for her?

Solenn also explains how she ended up writing a song with Kean Cipriano.

"With Kean, since we're co-writing, we're working together, with Ely, he wrote the lyrics and music."

She is very happy with the song Ely wrote for her. "He knew what I wanted na, he knew my tono, so parang nasulat niya talaga yung song para sa akin talaga, so it's very bagay to my voice, and it's a song that I love."

"Dati, di ako sure, kung gusto nila high note, sasabihin ko, ay di talaga pwede. Pero ngayon, I'm trying, if that is what they think would be best for me."

"And since mas may mga original songs, mas proud ako, kasi, iba, it's my own. Kahit na may songs written by other people, may songs din na I wrote the lyrics myself."

Does she have any expectation from her fans or even from music lovers when SOS comes out?

"Sana they'd be open to the mix of genres that's in it, sana magustuhan nila, para may concert ako sa October or something," she jokingly adds.

"We were supposed to plan one last February, with Lovi Poe, and it didn't push through kasi wala kaming time, kaming dalawa, so sana ma-push through sa taon na eto."

What expectations does Solenn have on herself when SOS comes out?

"For me, it's more of a way for me to like come out and be myself, na walang inhibitions, ganoon, it's really sharing a piece of me to the fans, a piece of my mind. I just want them to enjoy."

UPCOMING MOVIE. Keeping busy as always, Solenn is also coming out in a new movie under Regal Films, specific details of which she couldn't share yet.

"I can't talk about the cast, I'd rather not, baka they might change it pa," Solenn graciously answers when prompted if she can divulge even cast members' details.

"I don't really know the story, but I know the cast," Solenn answers when asked about her role.

She says that what made her say yes, "I love it whenever Regal offered me, and ever since the beginning, they have given me different roles."

"Like I've been in a comedy movie, I've been in like psycho drama, ngayon, I'm looking forward na may horror..."

Is she more confident at this stage of her career to take on more challenging movie roles?

"Of course naman I don't want do anything na they just give me, siempre kailangan ko na into the story."

"It's not because I'm being a diva na, oh I don't wanna do this kasi it's not worth me, hindi naman ganoon..."

"Kailangan since hindi ako born in this industry, it's not super natural yet for me to feel the character kung wala akong relation to the character, kung hindi ko feel yung character."

Is she starting to define a genre she'd like to focus on and move forward in, especially as she is working on two movies this 2013?

"Ibang genre ulit, but I'm super game to try anything that they offer me. I've been wanting to do horror and like more psycho thrillers, I love thriller movies..."

Since she hosts a weekly magazine-lifestyle show, Taste Buddies, with Isabelle Daza, is she now more open to trying new things in fashion, music, and eating new dishes?

"Ako, I've always been the type who goes with the flow, I don't really plan. Whatever comes my way, kung interested ako, I'll do it without thinking twice."

When asked to comment about her working relationship with Isabelle Daza now that they have reached the second season of Taste Buddies, Solenn quipped: "It's the same, she's still always late.

"But it's fun because we're close friends, and kahit when we don't work together, we're always exercising together, she's a triathlete also, she loves food more than anyone I know."

Isabelle and Solenn can be seen weekly on GMA News TV's Taste Buddies every Saturday at 5:40 p.m.