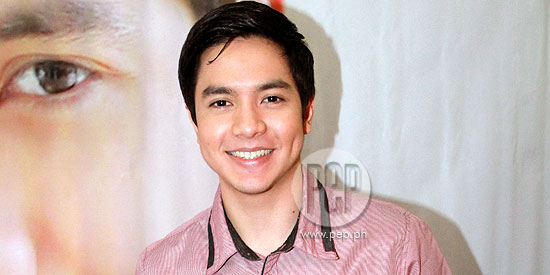 Alden Richards will be the first to admit that singing isn't his main talent.

For him, singing only comes next to his knack for acting. Despite this, he admits that his musical passion perfectly complements his boy-next-door appeal.

He listens to house music, ballads, and Gregorian chants when he wants to unwind. He loves Josh Groban, and as much as he wants to sing the world-famous tenor’s hit singles, Alden confesses that he simply can’t.

It's no joke, however, that the Kapuso heartthrob is now a recording artist under Universal Records.

His debut album, launched less than a month ago, is an ample compilation of seven tracks— all ballads that aptly reflect Alden’s “leading man” charm.

The carrier single, “Haplos,” a Shamrock cover, was recently included in the soundtrack of Mundo Mo’y Akin, the GMA-7 primetime soap opera that Alden stars in along with Louise delos Reyes.

If there’s anything that the album can be proud of—aside from the cover design being a fan-girl-treat—it's the original tune “Sa Aking Tabi,” written by “Ngiti” composer, Vince Katindoy.

The recording of the album wasn't easy for a newbie like Alden.

Recording the '80s songs “Everytime I See You” by Fra Lippo Lippi and “Can Find No Reason” by OPM artist Louie Heredia turned out to be the challenging ones to record for Alden.

He transcended the challenge nonetheless, and had fun in the process.

ACTOR TO CROONER. In a way, acting has helped Alden in his new venture.

He tells, “Reading the lyrics, you can understand the feeling of the lines and kung anong emotion yung dapat i-deliver dun sa verses nung song.

“So, mas easy for me kasi I started acting before singing, so mas naintindihan ko yung tamang ways on how to deliver a song properly.”

In that respect, Alden seems confident.

But is he really?

Despite his album topping local music store Astrovision/Astroplus' charts during its first week of release, the actor is still reluctant to admit that he is a legitimate recording artist.

For now, Alden is slightly comfortable with being called a “crooner.”