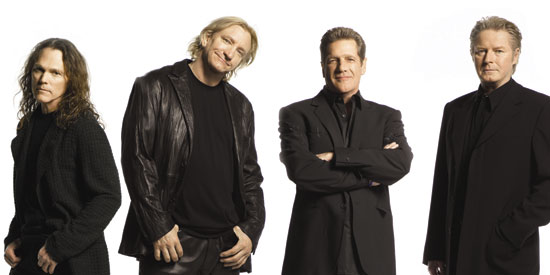 Fans of legendary rock band The Eagles were given a special treat last June 8 at the Cinema 8 of SM Megamall in Mandaluyong City.

Pinoys were treated to a one-night screening of History of the Eagles, a documentary that showcases the story of the rock group that spawned hits such as "Hotel California," "I Can’t Tell You Why," "Lyin’ Eyes," and more.

The Eagles is a popular rock group in the 1970s. They disbanded in 1980, and went on a reunion tour in 1994. The current roster is composed of Glenn Frey, Don Henley, Joe Walsh, and Timothy B. Schmit.

The History of the Eagles documentary captures the band’s story, from its formation, successes, and the fights and misunderstandings that led to its breakup. The movie contains never-before-seen footage and interviews of band members—new and old.

Fresh from premiering at the Sundance Film Festival, record label MCA Music (Universal Music Philippines) saw the opportunity to bring the documentary to the Philippines.

The record label then released a three-disc DVD for the documentary, with additional videos that fans would surely love to see. The special screening last June 8 was a celebration of this release.

“They’re the Eagles, and they’re a large band. For their last album, we sold 85,000 units. It’s a big thing. Eagles, for this album, we want to give our respect so that’s why we thought of this kind of event,” MCA Music marketing manager Melissa Juco told PEP.ph (Philippine Entertainment Portal) in an interview.

And what an event it was. Aside from the monumental documentary, viewers were also treated to a special performance of Eagles songs from acclaimed Filipino musicians RJ Jacinto, Sitti, and Nyoy Volante.

RJ, a rockstar himself, told PEP that he attended the premiere because he supports the documentary.

“I support it because the Eagles is part of our roots, and part of the history of rock and roll. And they’re a very good band. They perform so well. Classic rock talaga,” said RJ, who is a fan of the Eagles. In his musical performance, he was even able to replicate the epic guitar section in the song "Hotel California."

The Pinoy musician and entrepreneur believes the documentary came at the right time.

“Well, it’s about time, talaga, it’s about time. They have a very interesting history, and when they got together again, years ago, ang tugtog nila, mas maganda pa, e. Talagang, it’s like fine wine,” he said.

DVD DETAILS. Here are the details of the DVD from MCA Music:

“History of the Eagles will be released in both DVD and Blu-ray two-disc configurations—all with 5.1 Surround Sound and Stereo audio. A Deluxe Box Set will be released as a limited edition, complete with all three DVD discs (Parts One & Two, and, the bonus 1977 Capital Centre live concert); a 40-page hardback book featuring still photos from the films, all presented in a bespoke hard case box.

“Seeking to provide an unprecedented and intimate look into the history of the band and the legacy of its music, the Eagles partnered with Academy Award-winning filmmaker Alex Gibney (Taxi to the Dark Side, Enron: The Smartest Guys in the Room) to produce the film. Directed by Alison Ellwood (Magic Trip: Ken Kesey’s Search for a Kool Place), History of the Eagles is a meticulous creation featuring rare archival material, concert footage, and never-before-seen home movies that explore the evolution and enduring popularity of one of the world’s biggest-selling and culturally significant American bands.

“History of the Eagles made its television broadcast debut on Showtime last month, earning the network its highest ratings for a music documentary in eight years. Part One premiered at the Sundance Film Festival in January to great acclaim.

“History of the Eagles Part One dedicates two hours to the chronicling of the band’s creation and rise to fame in the 1970’s through its breakup in 1980. More than 25 new and exclusive interviews were conducted with all current band members—Glenn Frey, Don Henley, Joe Walsh and Timothy B. Schmit—as well as former members Bernie Leadon, Randy Meisner and Don Felder. Also featured are new and exclusive interviews with Jackson Browne, Linda Ronstadt, Kenny Rogers, Irving Azoff and many other seminal artists and band contemporaries who have been closely involved with the Eagles’ history.

“While personal stories from band members, managers, and music industry luminaries frame the narrative, it’s the unexpected moments—recording sessions, backstage interactions, and even a whimsical sequence from the Desperado cover shoot—that convey the extraordinary bond linking the artists, their music, and the times (an era when country-tinged rock and finely-honed harmonies spoke to a nation still reeling from unrest).

“Additionally, the documentary features previously unreleased home movies and archival footage. Personal photos, video and memorabilia amassed by the Eagles over the course of their career will also be seen for the very first time.

“History of the Eagles Part Two reveals the personal and professional struggles members faced while the band was apart, and chronicles the group’s dramatic reunion in 1994, as well as its resurgence in recording and performing throughout the next two decades. Among the band’s many achievements since reforming are its triumphant Hell Freezes Over tour, the 2007 release of Long Road Out of Eden (which sold more than 5.5 million copies worldwide and earned two GRAMMY® Awards), and its ongoing ascendance as an international supergroup.

“Eagles Live at the Capital Centre—March 1977 features previously unreleased concert performances of "Hotel California," "New Kid In Town," "Take It To The Limit," "One Of These Nights," "Lyin’ Eyes," "Rocky Mountain Way," "Best Of My Love" and "Take It Easy," all captured during the band’s two-night stand in Washington, D.C. during its historic Hotel California world tour.”