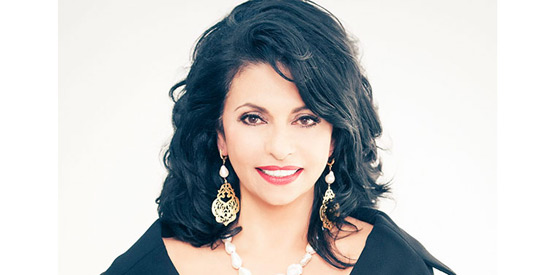 The lady embraced in different parts of the world finally makes it back to Manila after her last visit 18 years ago. Laura Fygi, a jazz singer influenced by multicultural roots and influences, holds a one night concert in Fairmont Raffles Hotel, one of Metro Manila's newest hotels.

On June 24, Laura Fygi performs alongside local singers Jacqui Magno, Richard Merk and Jeannie Tiongco under the musical direction of Henry Katindig. Presented by Laurel Media, the concert is titled A Magical Night with Laura Fygi.

The Dutch-born singer was raised in South America's Uruguay by an Egyptian belly-dancing mother and a Dutch father who was a manager at Philips.

In a short press conference before her June 24 show, PEP.ph and other members of the press got to interview and find out more about this exotic jazz singer. Her 13th album, Flower, is made specifically for the Asian market and Laura actually sings four songs in Chinese.

She reveals, "A Chinese company produced that one, that's why, but if a Philippine company is willing to produce, maybe I can sing in Filipino, who knows?"

She even jokes, "even though I had a Chinese coach teaching me, it seemed almost impossible to learn! I have the words in Dutch phonetically before me to help me sing. If a Chinese were to look at it, they would probably say, 'what is this?'"

Laura adds, "Jazz is huge in China, there were a lot of ballrooms with big bands like Glenn Miller that were very popular before and people would go out and dance. Now, China is being very jazz again and I noticed that most of the people, even the young people know the old jazz songs. It's always big there."

Laura Fygi has so enamored the Chinese that during a recent World Expo event, Laura recealls, "During the press conference, they remarked that the Chinese audience decided which foreign artist was to be invited and that they had chosen me. It made me go very quiet for a moment."

We ask her what about her resonates with Asians especially the Chinese. She answers, "I've been traveling in Asia for 20 years now. I think, and it's not only China, it's actually all of Asia I've noticed...they recognize the song and its emotion. It doesn't matter what language, even though they don't understand when I sing in French, Spanish, but they recognize it and there's so much emotion that moves them."

Now that she's back in Manila, we also ask her to share fond memories of her last time in Manila, and Laura quickly answers, "Chaos! It's a very lively kind of chaos."

"I noticed that in comparison to Japanese, Chinese, Philippines are very much alive, and have a lot of temperament and I believe this is because you are Spanish, and they had a lot of pizzazz in them. I kinda like that. I like it when people show their emotion and tell you things."

Laura is known for giving her audience a magical night to remember and Laura tries to explain why it is so in her own words, "I always include my audience, it's not just singing one song after the other."

"I don't just play and sing 26 songs, otherwise you might just better stay at home and play a CD. I like entertaining, I like interaction with my audience. I think that gives it so much more. I see it as my party and I've invited all these people in."

The multi-faceted diva also reveals another Philippine connection for her in the form of talented Filipino stage actor Jake Macapagal. Laura got to work with Jake Macapagal when he played the debonair King Marchan in the Asian Premiere of the Broadway classic Victor/Victoria at the Esplanade Theatre in Singapore in 2009.

Laura says that Jake informed her he would be watching her at the Fairmont Raffles for A Magical Night With Laura Fygi.

International jazz sensation Laura is known for her popular hits "Bewitched," "I Will Wait," "Smile," "My Foolish Heart," "Cheek to Cheek," "Fever," "Diamonds are a girl's best friend," "Sabor A Mi," "As Long As I'm Singing," to name a few.