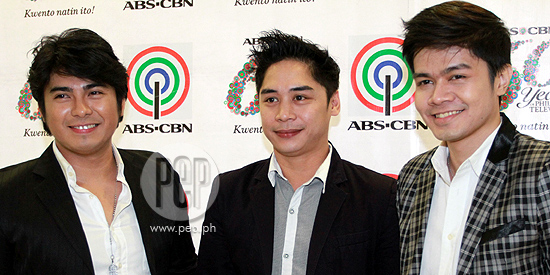 The Angelos—composed of (L-R) Louie Abaigar, founder George Sison-Tagle, and Rei Libiran—have been a classical music act since 2007. As the latest artist of Star Records, the trio aims to impart their classical music leanings to the mainstream music audience via their new 8-track album that blends classical music with pop. The album includes The Angelos’s cover of “Mula sa Puso,” “Lipad ng Pangarap,” “Paano

The classical music act, The Angelos, will be the first to admit that their genre—in contrast to pop and rock—does not cater to a wide audience in the Philippines.

“Sa history namin [as a group], we’re known [to sing] classical hardcore, e,” admits Louie Abaigar. The trio, formerly a quartet, has history indeed, having been formed in 2007 by the eldest among them, George Sison-Tagle.

Unknown to most pop ballad-loving Filipinos, The Angelos have travelled and performed abroad. In 2008, the group sang at the “Night of Rizal” celebration in Prague, likewise at the World Exposition in Zaragoza, Spain.

Moreover, The Angelos connected with other classical music-philes in the United States and Canada. Their exposure led some to call them "the Asian version of the Il Divo," the popular English quartet known for their operatic pop songs, not to mention their winsome faces.

The Angelos were formed because of the likes of Il Divo and the American singer/songwriter Josh Groban, said George.

While it worked for their musical influences, the local act struggles in reaching out to an audience in their own place of birth.

Outside the Philippines, people appreciated the group, told George, about their experience performing abroad.

But having said so, the group is not complaining. More than anything, The Angelos are challenged to reach out to the mainstream music audience.

“Classical pop crossover,” is exactly what their new album under Star Records is all about— pop songs rendered in the classical music style.

It also includes an original composition by Louie, the “inspiring” track titled “The Calling.”

Among the songs, The Angelos feel that the Jonathan Manalo-written song “Always You” is special mostly because it was originally performed by Filipina YouTube sensation Charice.

The Angelos are grateful, not to mention proud, of their new project, knowing it has heart.

As Louie puts it, the album is “a step” they are taking to extend classical music to Filipinos.

Catch The Angelos’s album launch at the SM North The Block on Sunday, August 18, at 4 PM.