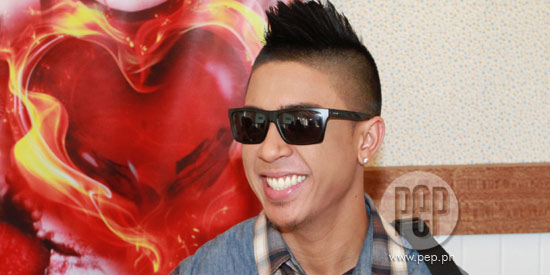 Writing and finishing a song in 20 minutes is apparently one thing Kris Lawrence can do when he is inspired.

The R&B Prince releases his third album (and first under GMA Records) titled Spread The Love. His first album Kris Lawrence was under Star Records while the second one, Moments of Love was under MCA Records. He jokes that he has been record-label-hopping.

How did he finally settle on GMA Records?

"Kung 100%, siguro nag-umpisa sa 40%. Kasi I was gonna go with Jay-R [he has his own record label and is Kris' best friend]. But I had a different strategy in mind, so I believe GMA could give it to me, which they did so I am happy with the choice that I made."

Kris says that all 12 tracks on Spread The Love are "all originals, finally." Of the 12 tracks, Kris composed eight of them.

Why didn't he write or compose all of them? "Kung lahat sinulat ko, mag-i-isang tunog lang yung album," the singer gamely admits.

"Actually I pulled out a couple of songs, we did a listening test tapos we all noticed na I use the same chords in a lot of songs. Sabi nila yan ba favorite chords mo?"

Spread The Love has been six years in the making, Kris tells us, "a compilation of songs I have written that I hadn't been able to release, that's why I am so happy it's out now."

Why did it take so long if he already had the material ready?

Of the songs on Spread the Love, Kris shares that "Q-York wrote that whole song, Rider, they did the whole thing."

"What's the song about? It's parang, yung relationship is unbreakable. You guys can take on the world together, kahit through anything."

"I chose Rachelle Ann Go kasi, I have a lot of fun, unang-una, fun performing with her live."

"I love her energy on stage, she is hands-down a great singer and I have always wanted to collaborate with her."

For baby Katy, or Katrence, his 11-month old girl with Katrina Halili, Kris shares that Make Me Whole is his song for her, "because she makes me whole."

Spread The Love, according to Kris, actually has a lot of songs for or about his partner, Katrina Halili.

"Marami, like I said, this is a compilation of songs that I wrote so lahat ng pinagdaanan ko since 2007, nakasulat dyan, parang diary."

"Parang it's the love that I have been feeling over the years."

What can he consider his primary influence for getting to write and come up with Spread The Love?

Passionately and with much feeling, Kris answers, "it's love, when you feel something, I guess you can call it inspiration, but it's that feeling when you're so happy, so, sad or whatever that feeling is, pag-purong-puro yung emotion, yun na yun. And you pick up a pen and start writing."

Kris picks up the back of the album and points out the songs written for or to Katrina: "Sabihin Mo Naman," "Di Na Matatanggap," "Addict," "Tell Me," and "Try Again."

Kris adds that his personal favorite would have to be "Try Again."

He answers why, "one, because I wrote it the fastest. I wrote it in like 20 minutes, I guess I was super inspired at the time. My pen just wouldn't stop."

"I went to the piano and I started playing, playing."

"I even started crying when I was writing."

What about Try Again made him write it that fast or get him so emotional?

"Di ko alam, siguro feel na feel ko yung sulat ko. I started crying, a lot of things came to mind, a lot of mistakes I made when I was young, my parents..."

Kris also shares the story behind another song, "actually, yung Sabihan Mo Naman, I wrote that for Kat."

He recalls, "yun, di ko talaga matatanggap yun kasi parang I felt like, why, I was, I felt like I did all I could. I let it all out in that song."

How does Kris feel about his dream from 2010, when he hinted to his new home network GMA7 of his wish for his songs to be used in different shows on the network?

Kris says it feels great. How did the inclusion of "Sabihin Mo Naman" as a song for a teleserye come about? "Sabihin Mo Naman" is featured as one of the songs on My Husband's Lover. "Hindi naman siya yung main theme. I think theme song siya nung two guys," Kris shares.

People were tweeting him, a couple of weeks back when the song first came on the show and Kris remembers feeling, "sayang hindi ko napanood."

"Natuwa ako, kasi ako sumulat noon, it feels, it's the first time I have a song that is out na hit on a show, tapos ako sumulat."

He does hope na "sana tuloy tuloy na yan," especially since another song, Ikaw Pala also got picked up as the theme song of the Koreanovela The Innocent Man, airing on GMA7 weeknights after My Husband's Lover.

"Ikaw Pala that was written by Tito Vehnee Saturno, the great, the Baby Face of the Philippines," Kris continues.

The carrier single is Ikaw Pala, although Kris says they started with Sabihin Mo Naman.

"Even before I went to GMA Records, I shot a music video for Sabihin Mo Naman, ako gumastos for the video. We pitched it to GMA Records and I told them I wanted that to be the carrier single. Um-oo sila, siguro kasi may video na, pero nung kinuha ng GMA yung Ikaw Pala, biglang kumambyo. Eh ngayon, kumambyo ulit, but hey, I am not complaining."

In order to further promote the album, Kris reveals plans of a concert this coming November, "mall shows, we will start next week. Binook nila ako sa birthday ko ng September 1! Malls like SM Marilao or Lazaro, I embrace all the mall shows, kasi promotion, kailangan yun. So far, so good, so far I am happy."

"I wanna do another one, just waiting for the right na babagay ulit sa akin," Kris quickly adds when asked if he will do theater again.

"But on the contrary, Sweet Charity di din naman yun bagay sa akin, but I still did it!," the singer remarks.

Sweet Charity was something Kris did in 2011 and he recalls, "that was the first time I did theater, I have to say I learned so much from it. It was definitely stepping out of my box, outside my comfort zone. It felt like I was starting from scratch, and I wouldn't mind doing it all over again, I learned a lot. It definitely broadened my horizons in singing, because I wasn't singing the usual way I sang."

What does he mean? "I felt like I was the worst singer in that place, because I couldn't get it!" He shares he felt that he was picked on by their vocal coach, always telling him he kept doing things wrong, to do it again.

"I think tama naman yun timing," when asked why he needed that experience in his life back then. What is he waiting for now? What role would make Kris step back into theater?

"Siguro, time. Because theater eats up, a lot, all caps, A LOT of time. And discipline, that is another thing I learned."

"Maybe early next year, sounds like a good time."