Young JV reinvents himself with his Doin' It Big album; recalls collaborating with "legendary" Gary Valenciano 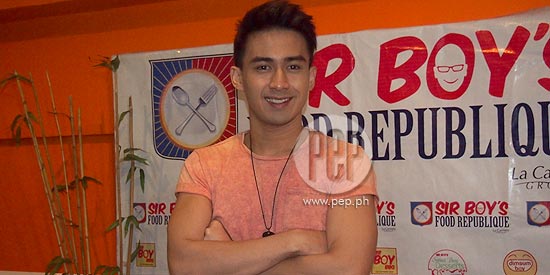 Young JV will launch his newly repackaged album, Doin' It Big, this Friday, September 13, at the Hyve Super Club, The Fort. One of the highlights of the album is Young JV's latest single “Ngiti,” which is his collaboration with Gary Valenciano.


Young JV started his career in showbiz when he was 19 years old. He started doing song-and-dance production numbers on ASAP XV, which he considers his stepping stone. But even before he became part of the mainstream showbiz scene, the singer-rapper revealed that he was already a part of an underground music group when he was 17 years old.

Now 23 years old, Young JV recalled how his song “That Girl” changed his life. “They discovered me in one song that I had, ‘That Girl’ first na-release yun sa MYX and akala nila foreign and everything.

“So yun ASAP called me and my handler sabi nila, we’ll form a group [A-Pop] with Sam Concepcion, Jaco Benin, Nel Gomez and myself. So yun na, from there after ASAP doon na po nagsimula.”

WHY YOUNG JV? People must be curious about the story behind his name Young JV but the singer told PEP.ph (Philippine Entertainment Portal) that they just wanted a name with great recall.

“You have Young JV instead of just a name and last name ‘di ba? Parang it’s very unique so we decided to keep it.”


After four years in the industry, Young JV realized that it’s about time to reinvent the songs he writes and sings but is changing his name part of the reinvention?

“My look’s different. We just want to keep it because it’s very unique.”

But until when will he remain 'Young'?

DOIN’ IT BIG. Apart from Young JV’s new look is his newly repackaged Doin’ It Big: Platinum Edition album that features 11 tracks. These include special collaborations with Karylle, Myrtle Sarrosa, Yeng Constantino, Akiko Solon (former Star Power finalist) and Laze and Yumi. One of the highlights of the album is Young JV's latest single “Ngiti,” which is his collaboration with Gary Valenciano.

Young JV still can’t believe that he released a single featuring Mr. Pure Energy himself. “To just perform with Gary V in one stage is a blessing and to have a song with him siyempre parang originals na ‘yon, e," gushed the young singer.

“Like legendary na si Sir Gary so to have a song with him, featuring ko pa siya so parang nakakaproud talaga na, ‘Wow man! I have it!’

How was he able to convince Mr. Pure Energy to collaborate with him?

Young JV recalled the moment he asked Gary Valenciano to listen to his song, “I was in ASAP nilapitan ko lang siya sa dressing room. I said, ‘Sir, please listen to this one song I wrote.’

“Then pinakinggan niya lang, dalawa kami, when he heard it he automatically said, ‘Yes! Let’s do it!’

“After that, after one or two weeks, we recorded the song na.”

Was Gary V hands on with the details of the song?

This Friday, September 13, Young JV will launch his newly repackaged album at the Hyve Super Club, The Fort. Through this event, the singer hopes to show the public the new and improved Young JV.

What can his fans expect on that night?

In an instant, Young JV answered, “A lot... a lot of sexiness. Hindi, joke lang!”

“It will be very entertaining my dancers and I are preparing.”

Unlike other artists, Young JV preferred to launch his album in a bar to make it more intimate.

He explained, “I am bringing my dancers kasi it’s a club so mas free ako dun that’s one of the reasons why I want to take that rather than mall shows kasi mas free, mas intimate and I could do whatever I want.

Indeed, Young JV is one talented man. Aside from singing and dancing, he is also known for his skills in basketball.

Young JV also disclosed that he learns a lot from his friend Gerald Anderson in terms of acting. He hangs out with Gerald and Rayver Cruz whenever they have free time.

“Kasi nung high school I was a varsity [player]. I was supposed to play for college pero music came in to me.”

Young JV has dreams of becoming a good actor someday. “Gerald was the one who taught me the ropes and everything sa acting and also si Direk Ruel Bayani he is also happy now.

“So yun, nahahasa din ako so slowly I can say I can be a good actor someday."