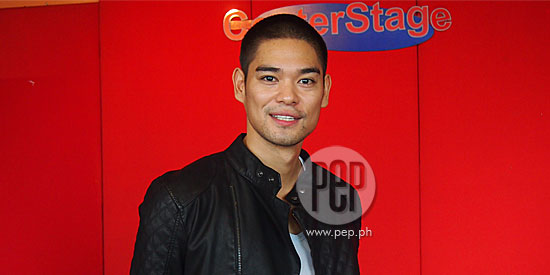 Prince of R&B Jay-R revealed that he has no plans of leaving the Philippines. "No way! My work is very valuable to me and I get to support my parents with this job. I would be an idiot to quit it talaga. There’s so many opportunities here sa Pilipinas.”

Jay-R told PEP.ph (Philippine Entertainment Portal) and other members of the media during his press conference at the Centerstage Family KTV and Resto Bar that he is again part of ALV Talent Circuit.

HOMEWORKZ. Jay-R revealed that he already has his own music label called Homeworkz. To date, he has seven artists that he handpicked himself.

Doesn’t he find it hard working on his own career and handling seven other artists?

How does he deal with the fact that these artists all have different genres?

He added, “May hiphop may alternative, may R&B, may pop so iba iba din. Wala lang country and jazz.”

Jay-R took the media on a trip down memory lane when he recalled how he started producing for other people. “The first artist that I launched was Kley, yung banda ng pamangkin ko na si DJ.

“Their first single was 'Tsismosa.' It was all over the radio, it was on MYX for a long time, tapos I posted their music video in YouTube and in one week 200,000 views na agad.

“So the impact is really nice and good and we haven’t put the video sa YouTube yet and I am really excited to see how many views it will get...sana milyon.”

How does Jay-R choose the artists to be included in his label?

He pointed out, “A lot come to me, a lot of artists give me their CDs and they hit me on Facebook, on Twitter, personally from friends.

“So as of now, the 7 artists that I have, that I handpicked myself I am just gonna stick with them muna.”


“TONIGHT.” Jay-R admitted that he is still in awe about the success of his new single titled “Tonight” with Mica Javier, a Timbaland Productions artist.

Did he expect that it would become this big?

He said, “I don’t really expect when I put out singles. I just want to push it as much as I can.

“So I kind of trained myself to really not get ahead of myself and itong music video namin na 'Tonight' we shot it sa States.”

As for their music video, Jay-R narrated, “Our director is Ramson Niega. He’s an Emmy award director na Filipino and he’s also our good friend so he helped us out shoot sa States.”

He revealed that they used high-tech equipment to shoot this video. “Ang ganda ng ginamit namin, e. It’s a RED camera. It’s like 50,000 U.S. dollars...imagine if you convert that to peso I don’t know how much it is.

“We really have a good tandem,” said Jay-R with a smile.

He added, “I feel like she’s also the same as me who wants to help people.

“So parang I am learning for her, so parang it’s a good tandem that we build on each other.”

What keeps him inspired nowadays?

Jay-R said, “I am on a panic mode kasi you know an artist's life span is not very long kung hindi mo aalagaan, e, so dapat talaga there’s something new all the time.

“I really have to work talaga kasi tomorrow it can all be gone.”

Does he still get affected by issues he encountered in the past?

The singer admitted, “I would say, yes it affects me. Kasi minsan when you’re in love, you just get in this little bubble.

“So you need your pleasures to get back to work.

“Kunwari you’re pleasuring so much and you feel like you’re not working anymore so you’ll get re-inspired to get back to work dahil doon, dahil you became lazy.

“I feel like it does affect me but it balances it.”

How is Jay-R after his break up with former girlfriend Krista Kleiner? Has he moved on?

“Yes, I don’t even know how long it has been already I think more than a year na ata,” said the singer.

He continued, “Matagal na, actually sa akin I feel so free. I really get to maneuver and do what I want imbis na when you’re in a relationship you really have to consult your significant other, ‘di ba?

“E, ngayon kahit ano na lang ang gawin ko, I just do it for myself.”

Jay-R grew up in the United States. Did he ever think of pursuing another career there?

He bluntly answered, “No way! My work is very valuable to me and I get to support my parents with this job.

“So you know if I stop this I will not be able to support my parents in that way.

“They really inspire me to keep me going and it’s passion lang I enjoy what I do.

“I would be an idiot to quit it talaga. There’s so many opportunities here sa Pilipinas.”

DREAMS AND GOALS. Now that Jay-R is successful in his singing career and he has already been effective in helping other people pursue their dreams, does he have any more goals for his own career?

He then revealed his ultimate dream: “To eventually produce full time. I don’t have to depend on a network to give me a money to survive na I can just depend on my own network of artist and music.

“That’s really my main goal talaga. To be off the grid talaga.

“I just want to create my own music.

“Without originals, we won’t have revivals, kaya originals talaga are the way to go.”

How does it feel about fulfilling the dreams of aspiring singers?

He explained, “Because not all artists would think about other people, you know?

“Usually the average person would think about themselves siyempre. Buhay is hard enough to think about someone else, pero for me I had so many blessings already and I just wanted to share the knowledge.

“That’s basically what I am doing, I am really helping them go the right direction.

“Of course, with the little financial, but it’s super minimal lang naman.

"So the main thing that I do for them is that I show them how they get there, what avenues to really take and to pursue their career.”