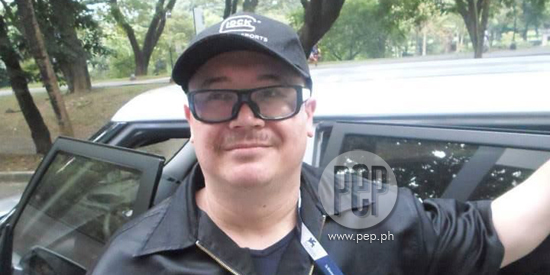 John Rendez has been given the go signal to do another album, a follow up to his Metal Dog album.

Rapper John Rendez is back and on a roll as he picks up a nomination from the Philippine Movie Press Club (PMPC) for his self-titled album John Rendez/Metal Dog released by Polyeast Records.


His Metal Dog album is nominated in the Rap Album and Rap Artist of the Year categories of the 5th Star Awards for Music.

Polyeast has also given John the go-signal to do a follow-up album, further evidence of Metal Dog’s success. It has also proposed that John compose rap songs for other artists, a development that pleased the artist no end.

In fact, even before the release of Metal Dog, John has been spending most of his time composing.

"Yes, I always have ready songs," he said.

PEP.ph (Philippine Entertainment Portal) bumped into him at a recent awarding ceremony held by film critics based in the State University, in which John escorted the top acting award recipient, his good friend Nora Aunor.

It is usual for John to tag along the Superstar, whom he also calls "Ate Guy." At the awarding ceremony, he stood outside the jampacked hall, observing the proceedings through the glass walls of the university museum.

BEING "UNDERGROUND." It’s never a big deal to John whether people recognize him or not.

"Yeah, that's part of my being 'underground.' I'm not mainstream, you know," he explained.

Does John see himself becoming more visible as he attains greater fame?

"I don't think so," he said nonchalantly.

Would he rather maintain his image as a "recluse"?

In an interview with PEP.ph (Philippine Entertainment Portal) on September 11, a week after the awarding event at his Eastwood residence in Quezon City, the 42-year old rapper and occasional actor opened up, saying, "I don't wanna be a 'slave' to my success. I want my success to be my 'slave.'"

John believes that's how artists should be.

In the meantime, he shared with PEP his enthusiasm over his revived career.

As one of the nominees, Rendez is looking forward to attending the PMPC’s 5th Star Awards for Music on October 13.

"Well, it's a good thing that they nominated me." said John. "If I win, I feel most welcomed, but I'm not expecting to win."

John has been doing rap since the early '90s, but for a time his career was "sidelined" by acting, co-hosting a weekly game show on T channel, marriage and fatherhood. He also suffered a period of bad publicity, which, he said, was not “through any fault of my own.”

"It's hard to get acceptance, when 'negative' people are around," he explained it away, if a bit vaguely.

John holds the belief that it makes sense to be an “iconoclast” at times as the need arises, an idea that may be counter-productive in showbusiness.

"Well, if you go against the system, that's how you make things run smoothly," he insisted.

And this is also the moment to make hay for rap artists (singer-composers) like John, as there have been no other other time in pop music history when rappers are as popular , “in demand,” and thriving in the business.

"I wouldn't call it as 'thriving,'" disagreed John.

He reasoned, "I think I can be considered 'underground' because that's not the usual thing [for an artist]... I'm not mainstream. I'm not pop..."

According to reports, the sales of Metal Dog had been exceptionally good after a few months of release late last year.

"I'm happy with the way the album is doing. At least, I'm not asking [buyers] 'door-to-door' to buy my album,” he said lightheartedly.

"If they don't wanna buy, that's their loss," he said, letting out a chuckle. "I did my part, I did push my product, it's up to the people [to like it]. At least, my job is easier."

HIGH END AND PANG-MASA. Some say John's album is a mix of "high end" and "pang-masa" rap compositions.

He elaborated, "I don't know if it's high end, or low end. It's just the way it came out; I'm not catering to any one group. It's 'spaghetti for the masses'. It's just like a presentation, morally, on how to be cool [but without taking any offense] ...”

He said his album does not distinguish between hip-hop and rap. "It could be above all that. It could be a 'voice,'" he said, referring to certain meaningful messages of the songs.

What rap mostly about, anyway, is imparting messages.

JOHN'S FAVORITES. The 11-track album consists of a variety of rap songs grouped into the so-called "high end" such "Sowerzitat," "No More Musik By The Suckers," "Under The Ground," and "Rat9MM" as well as the more readily acceptable tunes such as "Domination," "Coming To A Theater Near You." The rest of the songs are John's personal favorites.

"As everything of it is like 'a child of my own,' I think probably my favorites would be Metal Dog, it's more mature and mellow, then Plastik Pala and Kembotan."

He said these are the music he’d like played on radio. He cited "Everybody Sayaw," an old composition with good recall he revived in the current album, but those three songs “are tops.”

"Everything else is premium," he added.

According to Rendez, "There Can Only Be One," which is chosen as the album's carrier single is like a “’spirit’ that gives added vibrance to the album.”

"It's the spirit - not necessarily the 'soul' - like in a person, who can be with many spirits, but with only one soul," he said.

ACCEPTANCE FROM PEERS. This is not the first time John has been nominated for an award in recognition of his musical artistry.

He recalled starting to write songs and perform as singer-disc jockey in his early 20s.

"All my friends are black rappers. And I didn't say then, 'Hey, I like rap! I'd be a rapper!' You put in the hard work … and grew [into it]. You can't be a poser, a rapper, but not a true rapper. You have to have this spirit of a rapper," he said.

"Rap is attitude!," John asserted. "You do the work and you have to be accepted by your peers."

He meant this: "You're not a rapper, onstage, unless people shout, 'Hey, I want the white boy!'

A Fil-Am who grew up in Angeles, Pampanga, John said "being the only white” in the company of friends who were black, he turned out to be “the baddest white boy in the group.”

In his own words, "I was Eminem before Eminem..."

Eminem in international music is the white rapper who attained notorious fame.