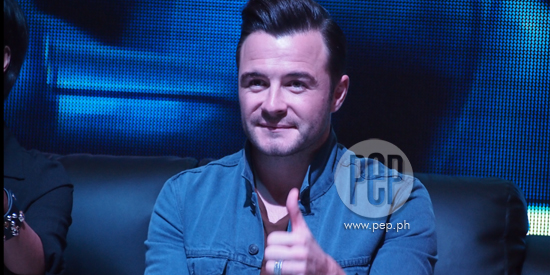 Shane Filan says about former bandmates: “The relationship is very good. We’re all still very good friends. You know, Westlife was a fantastic time. Fourteen years, we came to the Philippines a lot of times. A lot of great memories, you know.” The Irish singer will perform his latest single “Everything To Me” at his fan meet happening on September 28, 6 p.m. at the SM North EDSA Skydome and on S

Shane Filan of Westlife fame is back in the Philippines for his first solo tour.

The former frontman of the sensational boyband Westlife is back for the fifth time in the country to promote his latest extended play (EP) album Everything To Me.

PEP.ph (Philippine Entertainment Portal) and other members of the press had a chance to meet the Irish singer at his press conference held earlier today, September 27, at the SM Megamall Events Center.

Shane received a warm welcome from Pinoy Lifers (Westlife fans) when he arrived yesterday. The Irish singer is stoked to know that their fans continue to support them even when they became solo artists.

“I'm absolutely shocked, to be honest,” he told the press.

The 34-year-old singer continued, “Honestly, I... mahal kita, Manila! Is that right?

The former Westlife frontman is glad to back for the fifth time because of the warm welcome he receives everytime he comes here.

“I remember, the reception is like this. Crazy, it’s amazing. I’m so glad to be back.”

LIFE AFTER WESTLIFE. Shane’s last visit to Manila was in September 2011 for the band's Gravity Tour at the Araneta Coliseum. By June 2012, Westlife disbanded after being together for 14 years.

The singer-composer was glad to share that he and his former bandmates remain good friends even after they decided to split up.

“You know, Westlife was a fantastic time.

“Fourteen years, we came to the Philippines a lot of times.

“A lot of great memories, you know.”

To make his own mark in the music industry, Shane wanted to veer away from the pop music that his former band was known for. The Irish singer decided to add folk and country music to his musical style.

The singer said, “I have to be one hundred percent you know, what I love.

“You know, being Irish, folk music is very popular but I love country music probably more.”

Shane talked about the adjustments that he made when he became a solo performer.

He said, “I think, it’s definitely a new experience. It’s something that I need getting used to.

“Honestly, it’s singing so, it’s not something completely different from before.

“But, yeah, you’re on your own. It’s definitely a lot more focused on attention.

“So, you got to really… everything you do must be a hundred percent.”

The 34-year-old singer admitted that there’s a lot of pressure now that he’s a solo artist.

“There’s an element of pressure but it’s very different to Westlife.

“You know, as a boy band, we started very young and but I think now, I think I just got to take it one song at a time.

“I’m trying to build up, you know, people to love my music here in the Philippines and other countries.”

EVERYTHING TO ME. For his album, he revealed that his inspiration is his wife, Gillian, and his own life. Shane said, “When I was writing the songs, it felt like these songs have to be very true to me and true to my life.

“Well, I found it easier to write about stuff like that.”

He added, “It was just like telling stories, you know. It’s like some of the songs on the album are… they’re very kind of like, just honest.

“They’re very kind of like, you know, I’m not trying to hard to be too cool about writing certain lyrics.

“I’m just telling stories and they’re all little, many stories about my life, about Gillian.”

The pop singer also said that this is the first time he tried writing his own songs. Shane shared that he was initially hesitant to compose his own songs but managed to finish them for his album.

“The songs were very new to me. I didn’t write many songs before.

“So, I was quite nervous about it. The record label said, ‘We’d like you to write your own songs if you can. I was like, ‘I’d love to but I don’t know if I can, you know.

“So, [they said], ‘Just try and see how you get on…’ and, I got in the studio and the first session was ‘Everything To Me’ so it was a good start.”

The Irish singer also assured that listeners can definitely relate to his music.

For Shane, his wife and his children—Nicole Rose and Patrick Michael—are everything to him. This overwhelming feeling inspired him to write his songs. Being a father of two, Shane takes time to be with his family when he isn’t doing anything related to music.

“I like going to the cinema. Myself and my wife, we go to the cinema every week. Once a week or once every two weeks.

“We go see a movie like a date night. You know, we’re just like teenagers and go get popcorn and drinks. And that’s probably more special than for dinner. I love to do that with my wife.

“It keeps the romance alive.”

Watch Shane Filan perform his latest single “Everything To Me” at his fan meet on September 28, 6 p.m. at the SM North EDSA Skydome and on September 29, 4 p.m. at The Podium.