The Killers bring their Battle Born Tour to Manila 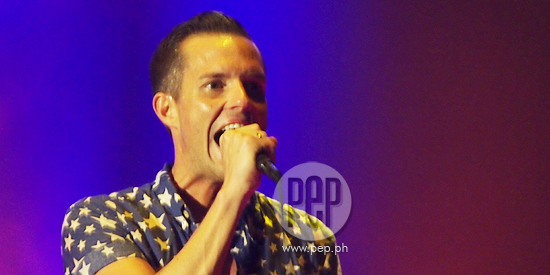 Brandon Flowers greeted their Filipino fans during the concert. The American vocalist of The Killers said: "Mabuhay, Manila! Sa wakas, The Killers are here! Finally… finally! Thank you for not giving up on us."

After three long years, American rock band The Killers finally performed in the Philippines. The Las Vegas-born band showcased their electro-rock tunes during the Manila leg of their Battle Born Tour.

The Las Vegas-based band was set to rock SM Mall of Asia Arena back in January 2010. However, the band announced an extended hiatus, which caused the cancellation of show dates for the Asian leg of their Day & Age Tour. Fans were disappointed but understood what the band is going through—the mother of the band's vocalist died of brain cancer prior to the cancellation.

From then on, Flowers and Stoermer focused on their individual projects until The Killers reunited and released their comeback album titled Battle Born last September 2012.

OPM band Sandwich, led by Raimund Marasigan, revved up the crowd before the main attraction. The band performed “Procastinator” and “For Your Consideration,” among others.

The start of the concert was a bit unusual since the band members started to go onstage with the whole coliseum fully lighted up before blasting the sounds with their biggest hit, “Mr. Brightside.” Usually, you would know a concert is starting when lights start to go out. But for the Killers, there’s no better way to make a grand entrance by surprising their fans who waited patienly for the band.

The band continued to rock the stage with “Spaceman,” and “Smile Like You Mean It.”

He attempted to speak again in Tagalog and said: “Sa wakas, The Killers are here! Finally… finally! Thank you for not giving up on us.”

The concert stage design was minimalist. A huge logo of their Battle Born album was displayed at the back part of the stage. No LED screens were used, which might have disappointed those located at the upper seats of the coliseum. However, fans were amused with laser light displays throughout the concert. Aside from laser lights, the production team also played with mood lights colored either red, blue or yellow.

At one point, Flowers went to the edge of the stage to have a closer look of his fans. The band vocalist even asked fans if they brought their dancing shoes for the concert. He even asked his fellow band members if they brought their own dancing shoes. Keuning replied by showcasing his electrifying guitar chops. Blanton did the same and displayed his mad skills in playing the bass guitar. Vannucci did not disappoint by dropping massive beats from his drums.

During the concert, Flowers asked Pinoy fans for the “motto” here in the Philippines. The American musician pointed out that in their hometown, there is a saying that goes “What happens in Vegas, stays in Vegas.” To answer his own question, Flowers recited (much to the delight of fans), “Maka-Diyos, Makatao, Makakalikasan, Makabayan.” 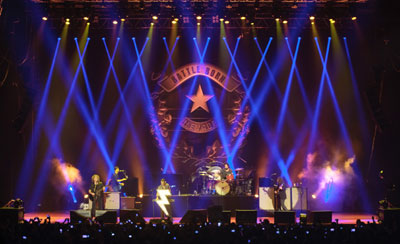 According to Flowers, they always bring “some of the Philippines” during their concert tour. The singer-songwriter pointed out that their touring guitarist Theodore “Ted” Sablay hails from the Philippines. Ted’s mother is a Filipina who grew up in Pampanga.

Flowers displayed his powerful vocals during the concert. The 32-year-old band vocalist continuously hyped the crowd to dance to their eletronic rock anthems as he paced back and forth onstage. There were times when he missed a few high notes but he was still able to entertain the crowd, especially when he performed tracks from their studio albums.

For their encore performances, the band performed “Change Your Mind” and “Jenny Was a Friend of Mine” before ending their Manila concert with “When You Were Young.”