Richard Yap: “Singing would be my first love.” 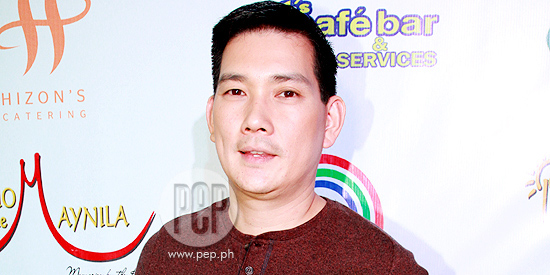 It might be too good to be true but the dashing Richard Yap, best known as Sir Chief of Please Be Careful With My Heart, happens to have a crooner in him too.

The 46-year-old commercial model—who catapulted to fame after ABS-CBN took a chance on him to play lead in the said morning soap—is now a recording artist under Star Records.

Richard’s debut album, an 11-track compilation of pop ballads and alternative songs—all covers—is meant to be an “easy-listening, feel-good” collection.

The TV actor, who has always loved singing since his youth, reveals that recording his own album was a far-fetched dream. Now it has come true.

He reveals at a press launch last Thursday, September 27, “My ambition before was to just be a lounge singer!

“Para sa akin, okay na yun because I didn’t think I could make it in the recording industry.

“I had no background in singing...”

Richard, whose musician idols include Mike Francis, Hall and Oates, and Queen, recalls that his passion for music began in his youth. In fact, he was a member of his high school’s glee club.

His biggest inspiration, he reveals, is the American country singer Kenny Rogers.

The 46-year-old actor points out, “He [Kenny Rogers] started singing at the age of 50.

“SINGING IS MY FIRST LOVE.” Apart from the vocal training he got during his glee club days, Richard also took lessons two years back in preparation for a show. Prior to recording the album this year, however, he tells that his only training came from singing during Please Be Careful With My Heart’s mall shows.

It works well for him that he has always been a singer prior to becoming a breakthrough star.

Asked to choose between acting and singing, Richard says that both are equally important to him. He says, however, “Singing would be my first love.”

He never imagined himself becoming an actor before but he did aspire to be a lounge singer!

CRITICISMS. The influx of actors-turned-recording artists in the local music industry has obtained negative comments, some even disapproving of what OPM has become.

Richard says he is open to receiving flak.

“We can’t please everyone. So, they can say what they want.

He tells that he has no definite plans yet of pursuing a career path other than acting and singing.

At the moment, Richard is content with his career.

“You know, I’ve been so blessed to be in the position that I am in right now.