Stephen Bishop, Michael Johnson, and Side A will hold their October 18 concert at the Big Dome 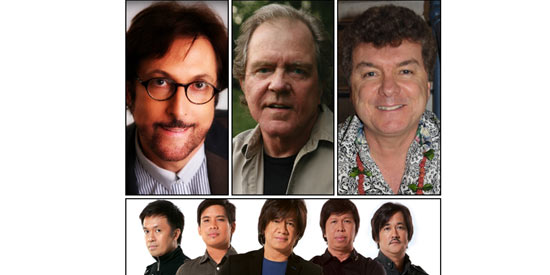 Brace yourselves for the best of pop rock music. Stephen Bishop, Michael Johnson, Joe Puerta of Ambrosia, and Side A (considered as the leading Filipino band of its generation) will be performing together in a once in a lifetime show on Friday, October 18, at the Smart Araneta Coliseum. They will be joined by the classical-pop tenor trio The Angelos.


Titled Back 2 Back 2 Back, the concert is a production of Viva Live Inc. and Redstone Media Production.

Pinoys have been enamored of "It Might Be You" for three decades now and they are therefore, also big fans of singer and songwriter Stephen Bishop, who created the song for the soundtrack of the movie Tootsie. Some of Bishop’s other big sellers are "On And On" and "Something New In My Life." He also got an Oscar nomination in the Best Original Song category for his song "Separate Lives," which was used for the film White Nights.

Michael Johnson’s distinctive vocals and mastery of the guitar resulted in some of the biggest hits of the '70s. "Bluer Than Blue," "I’ll Always Love You," "Give Me Wing," "This Night Won’t Last Forever," and "Almost Like Being In Love" remain big favorites among local fans to this day.

Joe Puerta is the bassist and vocalist of the famous Ambrosia. Generally acknowledged as one of the greatest pop/ rock bands of all time, Ambrosia was responsible for the big hits "Holding On To Yesterday," "How Much I Feel, Biggest Part Of Me," "You’re The Only Woman" and "I Just Can’t Let Go."

Side A is one of the greatest Filipino groups of all time. It is made up of Joey Generoso, Naldy Gonzales, Ernie Severino, Lee Von Cailao and Ned Esguerra. Formed in the late '80s the band rose to prominence during the '90s to become the country’s leading pop-rock band. It is best known for its party music and the soulful vocals of Generoso. Among its biggest hits are "Hold On," "Tuloy Pa Rin Ako," "Aawitin Ko Na Lang," "Tell Me," "So Many Questions," "Forevermore," "By Your Side" and others.

Bishop, Johnson, Puerta and Side A will also be at the University of Southeastern Philippines in Davao City on October 26. Bishop will have a solo performance at the Lagao Gym in General Santos on October 27.