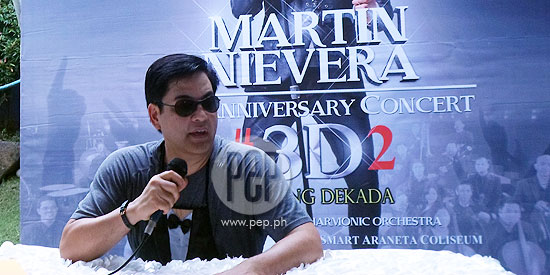 Martin Nievera will be back on stage less than three months after his successful 30th anniversary concert last September 13 at the Smart Araneta Coliseum.

Martin 3D: Tatlong Dekada The Repeat Concert will be held on November 22, once agan at the Big Dome.

The ABS-CBN Philharmonic Orchestra will play for him once more, but the Concert King still refuses to divulge who will be his special guests on that night.

Asked to rate that concert, Martin says, “Me on stage, I know I could have done much better.

“I’m just happy, parang I’m an old boxer—ang habol ko lang, I’d go the distance. And I did. I went three hours by myself on the stage, a few surprises.

“But the show itself, the attendance: I give it an A.

“For someone thirty years in the business to fill up the Araneta the way I did, however I did, whatever you wanna call it, for me was a huge success.

“But I think that there’s a place for seniors like myself. And now all the '80s singers are all gonna come out from their graves and say:

ANOTHER BIG SHOW. After the success of his September 13 show, the instinctive thing to do is proceed with smaller gigs.

What made him decide to stage a repeat? Martin replies, “Actually, the next step really, is to go intimate. But there was an offer to do a repeat.

“So before I can go back, to a smaller, more intimate, maybe twice a week show, let’s do it again!

“With more surprises, a few different songs, and try and get the curiosity up again.

“There’s so many songs we didn’t do pala, ang daming nagko-complain.

Does he still have any dream guests for his future shows? Martin answers, “Lea Salonga.

“Singing with Lea Salonga makes anybody world-class. She’s a world-class singer, a dedicated professional, anyone and everyone.

“She should write a textbook on how to perform and how to prepare for a performance. She knows it.”

THREE DECADES OF SINGING. As a singer with thirty years of experience in the business, what is his concept of a good singer?

For Martin, “You can make your whisper get the same response as a birit, you’re good.

“A whisper is just as effective as a biritan. If you can achieve those two things, then you’re a good singer.

“I haven’t achieved that yet. I want you to feel my song. When I sing 'Kahit Isang Saglit,' I start soft, and then I explode!

In her 25th Anniversary concert, Silver, last year, Regine Velasquez had to cut the show short after losing her voice.

“So you know what I do? Change the melody of the song. You have to. And I tell the audience straight out.”

He even related an incident when he completely lost his voice and had to improvise.

“One time in a wedding, I even sang over my tracks—because I had no voice.

“I cannot cancel the wedding, kawawa naman yung groom and bride. I sang over my tracks.

“‘You want me to cancel it? If I cancel it, your daughter, the bride, will be devastated. Ako yung surprise niya tapos hindi ako sisipot?’

“ Sometimes you have to take yourself out of the equation. This wedding reception is not about Martin Nievera—it’s about the bride and groom.

“And I don’t even know who they are! But I had to make a quick choice, I had no voice! Instead of canceling, I went on and I just sang with my tracks on.”