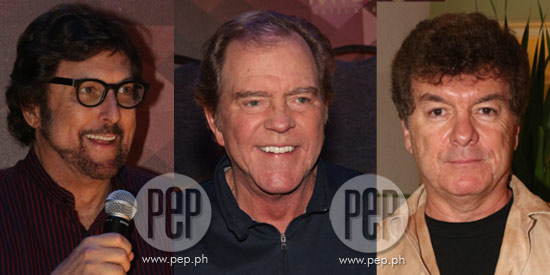 (L-R) Stephen Bishop, Michael Johnson, and Joe Puerta of American rock group Ambrosia will perform at the Smart Araneta Coliseum this Friday, October 18, for their concert dubbed Back 2 Back 2 Back.

American singers Stephen Bishop, Michael Johnson, and Joe Puerta of Ambrosia are three musicians who created some of the most memorable sounds of the '70s and '80s.

They are currently in the Philippines to perform at the Smart Araneta Coliseum this Friday, October 18, for their concert dubbed Back 2 Back 2 Back.

They will be joined by leading Filipino band Side A as well as the classical-pop tenor trio The Angelos.

BRUSH WITH EARTHQUAKES. Stephen Bishop, who marks his ninth visit to the Philippines, is saddened to know about the deadly 7.2-magnitude earthquake that hit Bohol recently.

The singer behind "On And On" pointed out, "It's awful. It's a terrible thing that happened. It's really sad. I've been in a couple of earthquakes in L.A. [Los Angeles] and it's scary."

For Michael Johnson, the singer behind the hits “Bluer than Blue” and “I’ll Always Love You,” the earthquake brought back vivid memories.

He recalled that during his first visit to the Philippines in 1990, he was able to experience the 7.9-magnitude earthquake that hit Luzon.

"First time I was here, it was the day of the big earthquake in Manila," said Michael.

"I was running down the stairs of the Manila Hotel and water was sloshing in their swimming pool. My wife was petrified.

"Right afterwards, there was a press conference. They asked, 'how do you find Manila?'

"I said, 'It was a very earth-shaking experience.' The truth of the matter is it's serious business."

For his part, Joe said that he learned about the devastation caused by the Bohol earthquake through CNN.

"I hope the worst is over because there have been over 800 aftershocks. Our thoughts and prayers go out to all victims.

"Being from L.A. [Los Angeles], you can commiserate with all these people. We've had our share."


ENDURING LOVE SONGS. During the press con, PEP.ph (Philippine Entertainment Portal) asked the veteran singers: since they have produced hit songs that have stood the test of time, what is their secret to these enduring love songs?

Joe Puerta bassist/vocalist of the American rock group Ambrosia quipped that he can't tell since it was a secret.

He smiled before answering, "Actually, it's the whole mystery of music. Why do certain melodies unlock certain feelings? All of life's experiences, all of the music we listen to, somehow our mind creates something new from all our experiences.

"The secret to longevity is to write beautiful melodies and lyrics that touch the heart. I think the great melodies and great stories stand the test of time."

Joe is also a firm believer in the musical talent of Filipinos.

"One thing I want to say about the Filipino people is how musical and how many great musicians and what a musical culture this is.

"I've always been impressed. I come from Los Angeles and I know a lot of Filipino musicians that I played with over the years.

"You have an extra musical gene, I think, in the Filipino people. Really."

To this, Stephen says about Pinoys, "The Filipino people are so warm and generous and sweet so I love coming here. The girls aren't bad either."

The singer-songwriter revealed that he is currently working on an album titled Be Here Then.

Joey Generoso of Side A also shared his thoughts about creating enduring love songs.

"When it comes to writing music, you have to be honest about it. When you write something about experience, it also becomes prophetic in a way. It might not have happened to some people before but when it does happen to them, that's the time when they will appreciate your song.

"That will keep your song alive through the years."

"BLUER THAN BLUE" IN TAGALOG? Michael Johnson is known for his sad love songs such as "Bluer Than Blue."

Are the songs based on personal experience?

"No," he stated. "Actually, the songs that I have been lucky with in my life are 'Bluer Than Blue,' 'Lagi Kitang Mamahalin' [referring to his song I'll Always Love You.'

"I did not write those songs... my job is to make them my own and make sure that there is not a molecule of those songs that are not from the heart."

In his interview with the Philippine media, Michael also revealed that he actually tried to translate his hit song "Bluer Than Blue" to Tagalog.

"It's difficult to do," he admitted. "If you have any suggestions, let me know."

When asked about the story behind "Bluer Than Blue," he explained: "I did not write that song. A good friend of mine, Randy Goodrum, wrote that song. He was in a studio and he played [on the piano] and then someone said, 'Wow, man, that's cooler than cool!'

"There was this look at his eyes and that's how it started."

When PEP asked him how he found out about his popularity in the Philippines, the singer behind the songs "Bluer than Blue” and “I’ll Always Love You” narrated his chance encounter with Filipino balladeer Jose Mari Chan.

"I was working in a club in New York City and I met a man there named Jose Mari Chan.

"He said, 'You know, you have a hit song in the Philippines.' He said 'I’ll Always Love You' is a hit song and then we got to talking and he brought me over for my first tour.

Jose Mari went to New York in 1990 to watch Michael in one of his shows.

LONG-LOST DAUGHTER. During the Manila press con, Michael also opened up about his daughter whom he has not seen for a long time.

"She's a singer and she used to sing the songs I had on the radio. We do a duet in my new album.

"Half of it should be in Spanish because it's about a man who lives across the border in the United States and a woman who lives in Texas. The song is called 'One Mile Apart.'"

The singer disclosed that his daughter was given up for adoption when she was four days old.

He narrated, "She found me. She found her mother first. I didn't know her birthdate or the hospital so I did not have any information.

"Her mother flew from Gibraltar where she lived and flew to Seattle in the United States where they had a cheerful reunion. Then she asked, 'Who's my dad?'

"They went to a computer and they checked my website. That's when she said, 'I used to sing those songs.'

"It's great. Now she and I both live in the same town."


Get to see Stephen Bishop, Michael Johnson, Joe Puerta of American rock group Ambrosia, and Side A perform live at the Smart Araneta Coliseum this Friday. They will also perform at the University of Southern Philippines in Davao on October 26. Bishop will be at the Lagao Gym in General Santos City on October 27.


This concert is a production of Viva Live Inc. and Redstone Media Production.