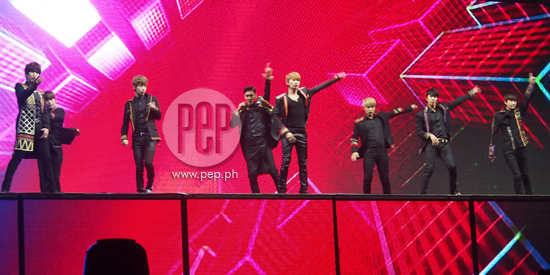 The members of Super Junior thanked their Filipino fans for their support. The Super Show 5 concert marked the group's third time to hold a concert in the Philippines. As fans waved their blue glowsticks at the Mall of Asia Arena, they created an effect that can be described as a "sapphire blue ocean."

The 15-member idol group thrilled those who attended the concert last Thursday night, October 24, at the SM Mall of Asia Arena.

This is the third time that the group known as SuJu visited the country for its Super Show concert series.

However, only 11 of the original 15 members were present during this 2013 concert.

Leeteuk (the group’s leader) and Yesung missed the Philippine concert because they are currently serving in the Korean army.

Meanwhile, Henry and Zhoumi of the Chinese sub-unit called Super Junior-M were given the chance to perform for their Filipino fans.

Ever Lasting Friends of Super Junior, also known as ELFs (fan club name), started coming in hours before the concert started. Fans have been looking forward to the return of SuJu since the Philippines was not included in the Super Show 4 concert tour in 2012. 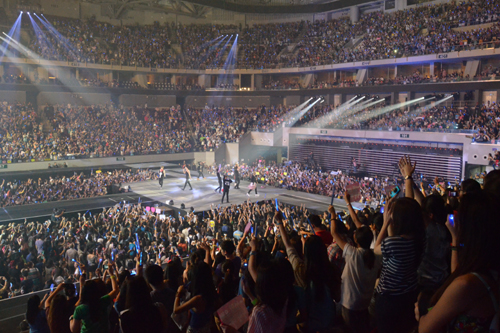 Super Junior opened the concert with chart-topping hits “Mr. Simple” followed by “Bonamana” and “Super Girl.” Sungmin, Zhoumi, Ryeowok and Kyuhyun performed the ballad “How Am I Supposed To Live Without You,” which was the only English song on their setlist. The dancers of the group—Donghae, Shindong, and Eunhyuk—gave a powerful dance routine while performing “Harlem Shake.”


As fans waved their blue glowsticks at the Mall of Asia Arena, they created an effect that can be described as a "sapphire blue ocean."

Some of the highlights of the concert include the cross dressing performance of Kangin, Siwon, Ryeowok, and Sungmin. Siwon popped out of the stage and performed “Saturday Night.” Ryeowok gave an upbeat performance of “Loving You.” Kangin teased fans with his performance of “Bloom.” Lastly, Sungmin gave a sexy dance number to the tune of “Ice Cream.” Henry also performed his first solo single, “Trap,” with Kyuhyun. 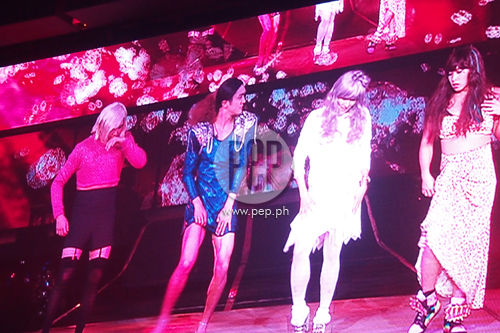 Another highlight of the concert was the segment wherein the SuJu members posed as superheroes. Ear-pounding screams and laughter filled the arena as members of Super Junior roamed the stage dressed up as Ironman, Spiderman, Son Goku, Woody, Hulk, Loki, Captain America, and Wolverine, among others. 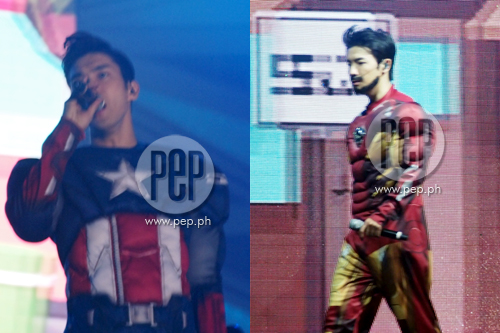 The concert lasted for three hours. For their encore, Super Junior performed their massive hit “Sorry, Sorry,” “Show Me Your Love,” “Sapphire Blue,” and “So I.” Henry, one of the members who can speak English fluently, told the crowd that they still consider Filipino ELFs as their loudest fans.

Towards the end of the concert, all of the members expressed their gratitude by giving messages in Korean that were immediately translated to Tagalog.


Eunhyuk, the group's acting leader, hinted that they will be back in Manila for Super Show 6.

The Super Show 5 concert was organized by Pulp Live Productions, SM Entertainment, and Dream Makers. The concert was also co-presented by Globe Prepaid and SM ePlus Tap to Pay.