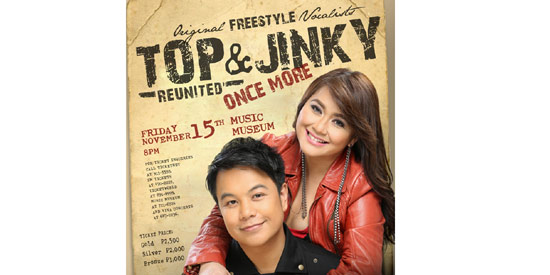 Their August 2013 concert billed Top and Jinky Reunited was the first time that Top Suzara and Jinky Vidal performed together after many years. Their second reunion concert Top & Jinky Once More is slated at the Music Museum in Greenhills on November 15, 2013.

Top Suzara and Jinky Vidal, the lead vocalists who made the band Freestyle a byword in Philippine pop music, will be singing onstage once more.

After years of separation, the tandem of Top and Jinky held a reunion concert billed Top and Jinky Reunited last August 20 at the Music Museum in Greenhills.

Presented by Viva Live Inc., Top and Jinky Reunited proved to be a huge success not only because it sold out. There was also the clamor for another show, which was too insistent to ignore.

Viva Live Inc. decided to do another show, calling it Top & Jinky Once More.

For their repeat concert, Top and Jinky will be singing new renditions and originals from their album, also titled Top & Jinky: Reunited.

The album features duets and solo by the two artists and is made up of old favorites like Reunited, Kung Ako Na Lang Sana, I Want To Give It All, Don’t Wanna Lose You and Even Now.

Top's compositions such as Ikaw Lamang, Right Here With You, Pangarap, Hindi Na Ba Pwede and Goodbye are also included in the album.

Top Suzara and Jinky Vidal were discovered by Viva Records as members of Freestyle in Davao two decades ago. Top was the guitarist and songwriter while Jinky was the vocalist.

The young pop band soon became the toast of Manila with hits Before I Let You Go, So Slow, and Bakit Ngayon Ka Lang.

Unfortunately, a falling out within the group separated Top and Jinky and both pursued solo careers for several years.

Their August 2013 concert billed Top and Jinky Reunited was the first time that they performed together after many years.