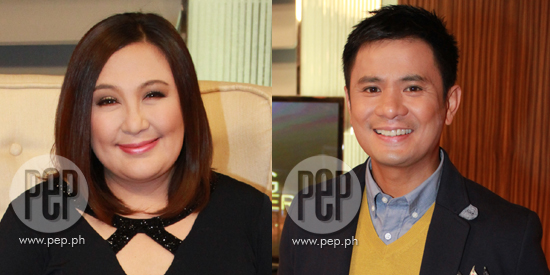 Sharon Cuneta on co-hosting TV5's The Mega and The Songwriter with Ogie Alcasid: "The truth is I feel we're so perfect working together. He′s a very generous person. It translates to him being a generous performer."

With their friendship going way back to the '80s, Sharon Cuneta and Ogie Alcasid do not have any trouble establishing rapport in their weekly musical variety show, The Mega And The Songwriter.

During a set visit last Wednesday, October 30, Sharon recalled how she and Ogie have grown closer through the years.

“He guested in many shows I did in the States. Dun bonding kami, we would ride a bus together.

On the other hand, Ogie expressed amazement that Sharon has remained down-to-earth despite her A-list status in show business.

“Tawa lang kami ng tawa. Pinagtatawanan niya ako. It’s very light. I love working with her. She’s a Megastar, di ba? But it doesn’t feel like she is because she’s so giving,” Ogie said.


The two hosts are equally proud that their show, which is now on its eighth week of airing, is reportedly gaining more viewership.

The Mega And The Songwriter's tribute to singer-songwriter Rey Valera last week was very successful. They performed some of his original compositions, which were used as theme songs for Sharon’s movies, such as "Maging Sino Ka Man, Sinasamba Kita and Kahit Wala Ka Na.

To which Ogie stated, “That’s how I kind of envisioned the show to be. We paid tribute to Rey.

Following the success of that episode, Sharon and Ogie will be paying tribute to more OPM and foreign hitmakers in the coming weeks.

Ogie excitedly shared, “We’re doing themes now. So, for the November 3 episode, it’s Gloria Estefan. Then the following week, we will be featuring songs of Beatles with Richard Gomez as our special guest.”

What makes the show more special is that Ogie, for the segment "Ask The Songwriter," will create new compositions based on requests by letter senders.

During the set visit, the singer-songwriter even played a sample of his new composition, Ikaw Ang Buhay Ko, which he wrote for a newly engaged couple.

“I didn’t realize how much I really missed doing a musical variety show until I was given the chance to do this with Ogie.”

Asked what other tributes that she’d like to do on the show, Sharon said that she’d love to feature more OPM artists, mentioning Gary Valenciano, Martin Nievera and Rico Puno, among others.

She also named Erik Santos and Jed Madela as guests, if ABS-CBN would allow them.

Ogie, meawhile, would like to feature songs of Jose Mari Chan, Freddie Aguilar and Yoyoy Villame, among others.

Catch The Mega and The Songwriter every Sunday, 9 p.m. on TV5.