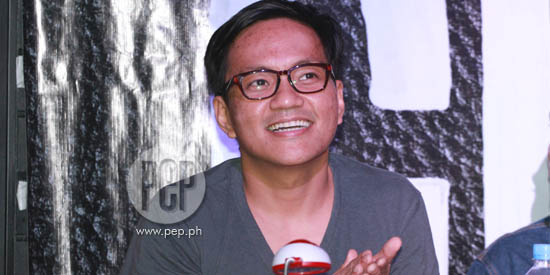 Without any recording company to back him up, Ebe Dancel is technically “homeless.”

Two years after releasing his solo album Dalawang Mukha Ng Pag-ibig in 2011, Ebe is no longer with his record label Warner Philippines.

The caveat: it was not his personal decision.

In an exclusive interview held on November 9, at the finals of Converse Get Loud band competition, PEP.ph (Philippine Entertainment Portal) merely asked for updates about his singing career when he dropped the bomb: “Warner let go of Filipino musicians.”

Ebe has successfully produced numerous hits, like “Hari ng Sablay,” “Makita Kang Muli,” “Mariposa,” to name a few, when he was still the front man of Sugarfree.

Cheerlessly he told PEP, “I think it was a decision by Warner International…”

Looking at the bright side, Ebe continued, “The good part is that all the musicians that were released still stay, still recording.”

He was referring to Rico Blanco, Sitti, Never The Strangers, and General Luna, among others.

For his part, “I’m talking to a few labels but I haven’t signed yet.

LOSING A BIT OF WEIGHT. The topic shifted to his slimmer physique.

We told him, “Parang pumayat ka…”

Have you been trying to become more fit?

Still smiling, he answered, “Five kilometers away from the problem.”

Running is not yet part of his daily routine, but sounding more serious, he resumed, “I’m not young anymore. I watch what I eat.

“I want to live a long, healthy life.

“Lalo na sa trabahong ito, we have to stay up late, [we are] exposed to smoke, and we have to do our share to take care of our body.”

NOT LOSING THE DRIVE. The hiccups, he said, are inevitable.

“Like I told a friend earlier, I’m just really happy to still be here. I’m glad I’m still there. It doesn’t matter in what shape or form as long as you see me onstage, still playing…

“I still play the old songs naman, the songs I wrote for Sugarfree.

“But I really enjoy playing my new songs now, and I’m grateful that a lot of the bands are still here.”

“I wanna start collaborating with my friends. I’ve done one with Gloc9 already.”

He was referring to the chart-topper “Sirena,” the 2nd most viewed OPM song on YouTube with 11,585,766 views to date.

His next target: a collaboration with Gary Valenciano.

Add to that, “I just wanna have fun. I wanna enjoy.”

Performing is very much a part of him.

His parting shot, “Ngayon kasi, mas nai-enjoy ko na yung maliliit na bagay. I play in a small bar and there are 20 people, and I’m static.”

To know more updates about his latest projects and gig schedules, check out @ebedancel on Twitter and EbeDancelMusic on Facebook.