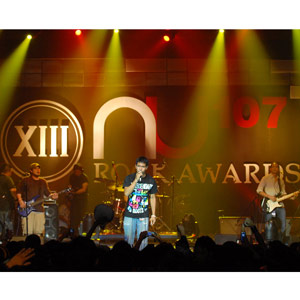 The 2007 NU Rock Awards has 18 categories overall, including Album of the Year, Artist of the Year, Song of the Year, and Best New Artist. Dicta License (in photo) was one of the bands that performed during last year's event. It will be held at the same venue as last year, the World Trade Center in Pasay City.


When the rock station NU 107 hatched its first Rock Awards way back in 1994, it seemed like an idea way ahead of its time. But on hindsight, the musical climate was already ripe for an event to honor Pinoy rock n' roll.

Trend changes and a couple of new faces later, the NU Rock Awards will stage the 14th installment of its highly anticipated affair on November 30 at the World Trade Center, Pasay City.

NU 107 station manager, Cris Hermosisima, fondly recalled that the first rock awards was more of like a close-knit family celebration of artists and musicians in the face of alternative music's commercial success after years of obscurity.

"But throughout the years the rock awards has evolved and become a big community of musicians and fans," Cris proudly told PEP (Philippine Entertainment Portal) last November 8 at their press conference held in Alchemy Bar, Julia Vargas Avenue, Pasig City.

The articulate station executive cited loyalty as the strongest determining factor on why NU 107 continues to remain steadfast despite the shifting taste of the public when it comes to music.

"From day one hindi kami nag-reformat. We've always been a rock station and kids who listened to us before still listen to that kind of music. It was actually passed on to generations, plus the fact that we never wavered in terms of reaching out and giving them what they want, and supporting the bands and giving them exposure," he explained.


TALENT MORE THAN PORMA. The NU 107 Rock Awards is not spared from harmful intrigue. Every now and then, some fans would question the results of the official tally and speak out in support of their favorite band or artist.

Resident DJ and The Dawn guitarist Francis Reyes defended the criteria being used by the station in arriving at a decision. Although fan votes matter immensely, musicianship and creativity remain crucial in coming up with the final list.

"It's not a popularity contest," said Reyes, "and not merely [paying] lip service, saying, ‘Uy, sikat, sige bigyan natin ng award. It's not really about those things because first and foremost we're talking here of talent and artistry, so, that would still carry the weight."

Cris, on the other hand, attributed the disagreement to the simple fact that some people or critics sometimes fail to take note of the rules of the competition.

"They just miss on some details but when you explain it to them they understand. But fortunately, we never encountered any huge problems about people or artists questioning the results or the credibility of the awards," said Cris as he heaved a sigh of relief.

But such quarrels are minor compared to the positive feedback generated by the yearly event. "As usual, it's gonna be great," grinned Francis, talking about the past and the upcoming rock awards.

The legendary guitarist-turned-DJ followed up his previous statement with a short yet convincing come-on: "We'll be having a party."

Here is the list of nominees for the 14th NU Rock Awards:

6. Wake Up Your Seatmate

VOCALIST OF THE YEAR:

GUITARIST OF THE YEAR:

BASSIST OF THE YEAR:

DRUMMER OF THE YEAR:

IN THE RAW AWARD:

SONG OF THE YEAR:

1. "WILL YOU EVER LEARN" by Typecast

5. "TURNING MY SAFETY OFF" by Sinosikat?

ARTIST OF THE YEAR:

ALBUM OF THE YEAR:

1. "WE STAND ALONE TOGETHER" by Bamboo

2. "EVERY MOSS AND COBWEB" by Typecast

1. Inksurge.com for Twilight of Hale

3. Sarah Gaugler and Clementine for Moonlane Gardens of Orange & Lemons

PRODUCER OF THE YEAR

1. Bamboo and Angee Rozul for We Stand Alone Together of Bamboo

2. "FRAILTY'' of Urbandub (Directed by Pancho Esguerra and Bluerain Media)

7. "WILL YOU EVER LEARN" of Typecast (Directed by Pedring Lopez)