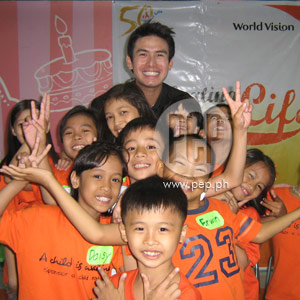 Christian Bautista is all smiles as he poses with World Vision-sponsored children who performed during the presscon of the event. The benefit concert will take place on November 24 at the Philippine International Convention Center (PICC) Plenary Hall in Pasay City.

On its 50th anniversary of addressing problems of poverty and social inequality, World Vision will hold a benefit concert on November 24 at the Philippine International Convention Center (PICC) Plenary Hall in Pasay City.

World Vision ambassadors for the youth Christian Bautista and Nikki Gil, along with sponsors Sam Concepcion and Reymond Sajor, will topbill the show, which will also feature popular performers The Company and Girl Valencia. Titled Celebrating Life, this concert is part of World Vision's three-month campaign to raise funds and recruit sponsors for 3,000 children.

"The series of activities for our 50th anniversary celebration seeks to celebrate God's faithfulness to World Vision for the past 50 years and raise public awareness to improve the lives of needy children across the country," said Dominique Monera-Tabora, World Vision's communications manager.

For as low as P450 a month (or P15 a day), a person can already sponsor a child's education through World Vision. Asia's Pop Idol tells PEP (Philippine Entertainment Portal) how he got involved with this NGO.

Christian narrated: "Si Auntie Linda Montelibano noong one Christmas parang sinabi niya sa akin, ‘Gusto mong maging sponsor ng child?' I asked, ‘How do I do that?' ‘Just pay this much because we're gonna send the child school for the whole year. Ako naman, parang ‘Wow! Mura yun ha. What is it called?'

"Then she said it's World Vision tapos binigyan niya ako ng leaflet. This was two years ago. Tapos the next year, World Vision talked to me kung pwede akong maging part ng World Vision and eventually I became one of the ambassadors."

How many kids did he sponsor through World Vision?

"Tatlo sila e. Pinili namin yung malapit. Taga-Cavite rin so that I will be fortunate enough to spend time with them and to go to where they usually hang out."

"I'm sponsoring three kids—very cute, cute kids na talagang full of potential. They're easy to be with. They're cool," described the pop singer about the three Elementary students who benefit from his sponsorship.

This international Christian relief, development and advocacy organization currently supports over 120,000 children through its child sponsorship program. The organization has directly assisted 250,000 poor Filipino children and their families since 1957. More than a million people have benefited from its non-sponsorship projects, including its child labor initiative and social mobilization on tuberculosis.