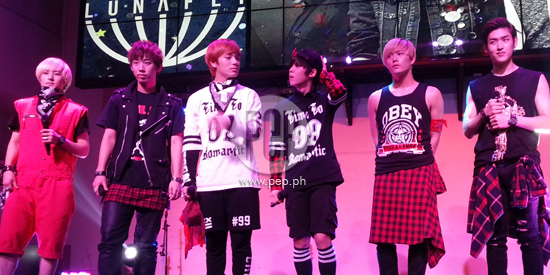 Filipino K-pop fans had the chance to see the six-member South Korean idol group LC9 during the Lukie Beats Fan Meeting held last Sunday, December 29, 2013. The lucky fans were able to see their idols at the K Pub Bar and Grill in Bonifacio Global City, Taguig.

LC9 is composed of King, Eden, AO, Rasa, Jun and J-hyo. This K-pop group was luanched in May 2013 by Nega Network, home of other famous K-pop idol groups including Brown Eyed Girls and Lunafly.

PEP.ph (Philippine Entertainment Portal) and other members of the press had a chance to know more about the boys of LC9 during their fan meeting.

E.Den, who was raised in Canda, explained the origin of their group's name. “The meaning behind LC9 is… because the ‘LC’ stands for League of Competition which means that we have been ready for being able compete in the K-Pop scene.

“And we’re competing while we were training so, we’re always competing, we’re always ready for like a good battle or anything like that. That’s the meaning behind the name.”

King quipped that he doesn’t know why there is the number 9 on their name but then said that number means that “at the end of the journey, we are gonna be 9.″Their manager, Jeong Jae Min, added that the number 9 from their group name is the highest single digit number from 0-9, which symbolizes success.

When asked to name their musical influences, E.Den admitted, “I’ve always been to hip hop and stuff so I really like Drake, he’s also from Canada, and Big Sean.”

Rasa told PEP that they are looking forward to releasing their first full-length album in 2014. He also expressed his wish for the group to receive a Rookie of the Year award. The members are also hoping to have their own billboard along EDSA like 2PM’s Nichkhun and Lee Min Ho.

During one segment of the fan meeting, PEP and other members of the press asked them revealing questions.

Who is the noisiest member?

LC9: Everyone pointed at AO.

Who is the laziest member?

LC9: Everyone pointed at King.

Who eats the most?

LC9: Point at each other

E.Den: “It depends on the menu because we all have different taste in food so, it depends on what we’re eating. Some people will go crazy like when we eat pizza…”

Who is the most thoughtful member?

LC9: Everyone pointed at Rasa.