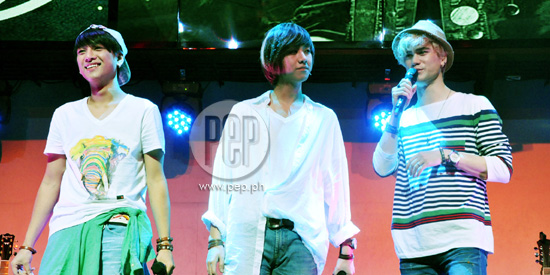 The members of Lunafly—(L-R) Han Seungyun, Shin Teo, and Sam Carter—are excited to meet their fans during their 2014 world tour. The trio recently performed in the Philippines at the Lukie Beats Fan Meet in Manila held last December 29, 2013, at the K Pub BBQ and Grill in Bonifacio Global City, Taguig.

The South Korean acoustic all-male trio Lunafly, together with their labelmates, League of Competition #9 (LC9), celebrated a post-Christmas party with their Filipino fans at the Lukie Beats Fan Meet in Manila last December 29, 2013.

Before the start of the party at the K Pub BBQ and Grill at The Fort Strip in Bonifacio Global City, PEP.ph (Philippine Entertainment Portal) had a chance to know more about the members of Lunafly.

The leader of the band is 26-year-old singer Samuel “Sam” Carter, who plays the guitar and violin as well. He is also the designated translator of the group. Being half-British and half-Korean, Sam speaks English fluently.

Shin Teo, 20, is the pianist, bassist, and percussionist of the group. Meanwhile, Han Seungyun plays the drums and guitars.

Sam explained the meaning of Lunafly: "Luna, of course means moon. You could say it means ‘Fly to the Moon’, which is a bit cheesy.

“But, I guess we kinda’ wanted to give the message that anybody can really achieve their dreams."

NOT YOUR ORDINARY K-POP GROUP. On the 6th of September 2012 Lunafly released their debut album worldwide via iTunes titled “Super Hero.”

Their debut album consists of two English tracks to allow international fans to connect and fully appreciate their music.

The band released their first domestic album on the 27th of September with the single “How Nice Would It Be,” which topped digital music charts in South Korea.

Lunafly has stood out among most K-Pop idol groups because it makes its own music.

It is known that writing songs and creating one's music are the biggest challenges to the entertainers in the music industry.

“We come up with chords, and melody… ideas, and we show each other,” Sam told the press.

"At the end of that, ‘Maybe we should do this’.

Sam added, "As musicians, we write our music... we have a lot of creative freedom" to explore other genres such as rock music.

“Because we play guitar, I think that’s always a possibility.

“We wanna try everything, really.

"There’s no limit to the genres that we want to try,” he said.

Lunafly has also done countless cover songs including Pink’s “Just Give Me A Reason,” Westlife’s “My Love,” Katy Perry’s “Roar,” and One Direction’s “Heart Attack,” among others.

As a result, Lunafly has gathered a huge following from different parts of the world.

Part of the group's success lies in the strategy to consider the suggestions of fans when picking which songs to cover.

Sam said, “When it comes to cover songs, many people suggest a song list or our favorite songs.”

2014: WORLD TOUR. Having a huge international fan base, Lunafly makes the effort to meet their fans from all over the world.

“We feel very good and we want to go to many countries,” Sam told PEP.

“So we will visit every country where we have fans—South America, North America, Europe, North Africa, Asia.

"And of course, the Philippines once more.”

Teo said he wants to find time to “refresh” himself, as it had been a crazy schedule the past year:

“I want my mind to feel refreshed, like two years ago.”

Yun, the maknae (youngest) of the group, shared he wants to learn different languages to communicate well with their fans:

“I want to learn many languages because we go to many countries and I want to communicate with our fans.”

Sam, of course, plans to write more songs in 2014: “I would like to write a song that I’m happy with.

"One song every two weeks.

“So in one year, that’s like two songs in a month.