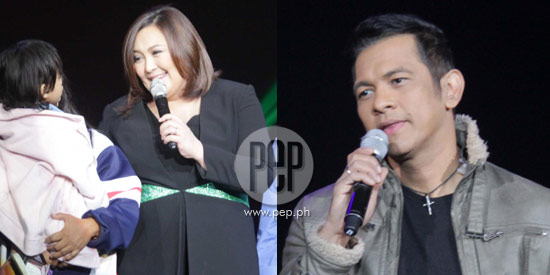 During the Voices for Visayas concert, Sharon Cuneta (left) talked with Yolanda victims who became emotional as they recounted their tragic typhoon experience. Gary Valenciano (right) composed a song titled "The Answer," which he hopes would inspire the survivors. Manny Miñana and Nanette Medved-Po (not in photo) announced that the benefit concert was able to raise P18 million.

The purpose of the Voices for Visayas concert became even more poignant and clear when Sharon Cuneta interviewed actual Yolanda victims from Tacloban.


They could not hold back tears after the Megastar serenaded them with the song "Smile" during the January 15 event held at the Newport Performing Arts Theatre in Resorts World Manila.


They all lost loved ones and yet they are all unanimous in their desire to go back to Tacloban and rebuild their lives there. Countless more have suffered not just in Tacloban but in other provinces.

The benefit concert Voices for Visayas was such a resounding success that it was able to raise P18 million pesos.

The proceeds of the concert went to the Philippine Disaster Recovery Foundation (PDRF) for the funding of the shelter projects of Habitat for Humanity and Gawad Kalinga for the typhoon survivors.


The PDRF aims to create a permanent fund, not just for Yolanda and Bohol earthquake victims, but for other disasters in the country.

Just days before, on January 12, heavy rains have caused landslides. It led to the death of six people and the destruction of homes, bridges and roads in the provinces of Davao Oriental, Compostela Valley, Agusan del Norte, and Agusan Del Sur. This time, it was Mindanao that was hard hit instead of the Visayas region.

PDRF President Butch Meily described their organization as “a conglomeration of organizations and business united to create a more permanent fund for all disasters in the Philippines.”

The most prestigious names in both music and dance lent their performances for free.

Apart from the performances, the night was also special because of a song composed by Ryan Cayabyab with lyrics written by film and TV director Jose Javier Reyes.


The song, "Just Believe," can be considered a fitting finale for the Voices for Visayas concert. The lyrics are meant to inspire hope in the midst of tragedies having the chorus: Just believe / For each season comes the lessons from the rain / Just believe it shall be over / And we shall rise again… rise again!

Gary Valenciano also debuted his own song that he wrote for the occasion: "The Answer." The song is a reflection of his Christian faith. The lyrics indicate that Christ is present especially during the most tragic of circumstances.

Voices for Visayas was led by Manny Miñana and Nanette Medved-Po, with Miguel Miñana as concert production head. The team of Ollie Campos, Tina Colayco, Irene Martel-Francisco, David Guerrero, Doris Magsaysay-Ho, Joy Lagdameo and Ricco Ocampo were able to recruit and pull together organizations for the production, promotion and ticket sales of the event.

Choosing the Newport Performing Arts Theater as a venue became advantageous since it allowed excerpts from two musicals to be shown during the concert: Katy and Ramahari. Ryan Cayabyab composed both musicals.


Ramahari had 3 National artists in Bienvenido Lumbera (Libretto) translated to English by Rolando S. Tinio and costumes/set designed, Salvador Bernal. The colorful backgrounds, particularly in Ramahari, came alive with animated Indian inspired textures and colors. This was possible with the largest LED screen in Asia exclusive to the Newport Performing Arts Theater (or NPAT for short).

Katy lead star Isay Alvarez performed "Minsan Ang Minahal Ay Ako" while her husband Robert Seña was part of the Ramahari excerpt. Both husband and wife are part of the PETA musical Rak of Aegis, which will be staged soon at the PETA Theater Center.

After the show, Robert Seña shared that the artists are willing to perform another play date for Voices of Visayas. He said, “Maybe a replay of the concert with more affordable ticket prices could be produced so more people can watch it and raise more money.”


Lea Salonga is slated to headline the concert Do You Hear The People Sing? This concert, which will feature songs from Les Miserables and Miss Saigon, is also for the benefit of the Yolanda typhoon victims scheduled for January 29 and 30 at the NPAT, Resorts World Manila.