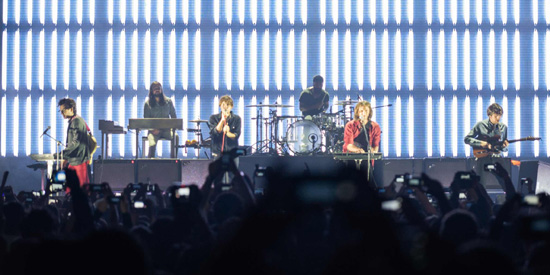 The members of French indie band Phoenix were pleased to meet their Filipino fans for the first time in 14 years. Their sold-out concert was held last January 21 at the World Trade Center in Pasay City.

It was a very sentimental evening for Filipino fans of the Grammy award-winning indie pop band Phoenix during the band's sold-out concert held last January 21 at the World Trade Center, Pasay City.

This is the first time the French band—composed of Thomas Mars (vocals), Laurent Brancowitz (guitars), Christian Mazzalai (guitars), and Deck D’Arcy (keyboards, bass)—visited the Philippines during their 14-year existence as a group.

Phoenix counts Pinoy celebrities among its loyal fans. In fact, Anne Curtis, Erwan Heussaff, Jasmine Curtis, Maxene Magalona, Saab Magalona, John James Uy, and Robbie Becroft were among those who made it a point to watch the band perform live. The audience consisted mainly of yuppies, all fashionably dressed to impress.

14 YEARS, A BLISS. Organized by Karpos Multimedia, the concert featured a huge LED screen providing the ambience of the jampacked venue.

Audiences started screaming from the top of their lungs upon seeing each Phoenix member emerge one by one onstage.

Without much ado, Phoenix immediately started playing the first song of the evening titled “Entertainment” from the 2013 album Bankrupt! Red lights from the huge LED screen added to the vibe of the concert.

Phoenix followed it immediately with the songs “Lisztomania” and “Lasso” from the fourth studio album Wolfgang Amadeus Phoenix, prompting fans to sing along.

Thomas was pleased to hear fans singing tirelessly with them all through out the concert. The band vocalist greeted their Filipino fans and shouted, “Manila! We waited for 14 years to come here!”

The Manila crowd did not disappoint their idols who took note of the high energy during the first three songs. “You’re the best crowd, the loudest!” Thomas exclaimed, eliciting eardrum-shattering screams from concertgoers.

During the band's press conference, Thomas recounted their visit in Mexico as their most memorable concert, so far. Branco also agreed said it’s because of the crowd’s “general aura.” Given the band's warm reception from Pinoys, do they now have a new favorite destination?

Phoenix nailed their arrangements for their old songs including “Long Distance Calm,” “Too Young,” “Girlfriend,” and “The Real Thing.” Thomas delivered a near-flawless vocal perfomance that was definitely a crowd-pleaser. Meanwhile, brothers Christian and Branco, as well as Deck were really energetic in giving out awesome beats and embellishments.

Moving on to their latest tracks from their 2013 album, the band rocked out the songs: “Trying To Be Cool,” “Drakkar Noir,” and “Chloroform.” The foursome continued on with earlier favorites such as “Run Run Run,” and “Consolation Prizes.”

The audience was ectastic to hear the band perform “Sunskrupt!”—a mash-up of the songs “Love Like a Sunset,” a purely instumental track from their 2009 album, and “Bankrupt!” Fans were left in awe as bright, colorful lights flashed onstage and photos of the streets of France were shown on the LED screen. More fist-pumping action continued as “S.O.S. in Bel Air” and “Armistice” were played onstage.

ENCORE AND MORE. As their main set ended, audience members continued to chant, "We want more! We want more!" It didn’t take long for the band to reappear on stage to perform four more songs for their encore.

“Manila, do you want more?” Thomas asked the rapturous crowd. Their fans screamed their response upon seing Phoenix back onstage.

As if those shrieks weren’t loud enough, he asked again, “Now, do you want more?” And the crowd gleefully answered, “More! More!”

Thomas Mars of Phoenix was pleased to see their Filipino fans upclose during their Manila concert. Photo by Magic Liwanag for Karpos Multimedia
Continue reading below ↓

For the first song, the band’s frontman slowed it down a bit with his acoustic performance of the song “Countdown” with Christian playing the guitars. Thomas went to the edge of the stage and the ladies were able to get their fill of “kilig” moments with the band vocalist. At one point, a lady was overheard saying, “I love you so much!”

When the band performed “If I Ever Feel Better,” Thomas told the audience, “Sing along if you know the chorus.” For their last song, Phoenix performed “Rome.”

Just when the audience thought the band would bid their goodbyes, during their instrumental reprise of the song “Entertainment,” Thomas went down the stage and passed by their fans, jumping from one chair to another in the VIP section. The band vocalist made his way to the center of the concert venue to reach fans in the Gold section.

After 18 songs and almost two hours of pop rock music, Phoenix bid farewell to their fans during their curtain call.

Overall, the Phoenix concert in Manila can be considered one of the best examples on how rock concerts should be done, setting up the bar really high for upcoming rock concerts in the country.