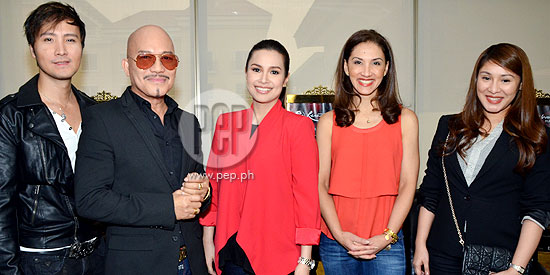 The Do You Hear the People Sing? concert is ultimately the marriage of songs from famous musicals by Alain Boublil and Claude-Michel Schonberg. The songwriters of Les Miserables and Miss Saigon have made an effort to bring the concert to Manila to help Habitat for Humanity in building 200 houses for survivors of typhoon Yolanda. The concert will be staged from January 29 and 30 at the Newport Per

The world-famous musical theater composers Alain Boubil and Claude-Michel Schonberg are holding a two-day concert in Manila to bring in aid for survivors of typhoon Yolanda.

From January 29 to 30, Do You Hear the People Sing?—a show that contains all their best song collaborations from the musicals Les Miserables, Miss Saigon, Martin Guerre, among others—will be staged at the Newport Performing Arts Theater, Resorts World Manila.

The proceeds of the concert will be donated to the non-profit organization Habitat for Humanity to aid in building 200 houses for those who lost their homes when typhoon Yolanda hit Central Visayas.

Like hitting two birds with one stone, those who will see the concert will witness a rare performance by theater actors previously cast and are currently part of the musical Miss Saigon.

OPM singer Rachelle Ann Go, who was recently chosen to play Gigi in the London production of Miss Saigon, will join the other alumni.

Accompanied by the ABS-CBN Philharmonic Orchestra, under the baton of Maestro Gerard Salonga (who also serves as musical director/conductor of the Asia Pacific tour of Do You Hear The People Sing?), these star performers will be joined by an 80-member adult choir consisting of members from the Ateneo Chamber Singers, Mass Appeal, Aleron and the former members of the San Miguel Master Chorale. Twenty children from the International School Manila Middle School Honor Choir will also perform. Choirmaster for this event is Jonathon Velasco.