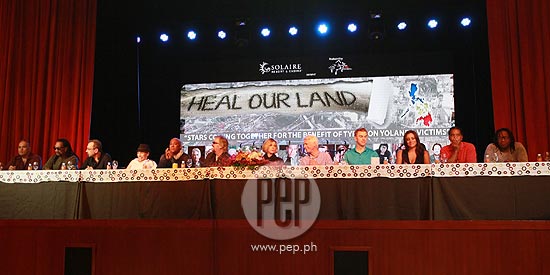 Heal our Land is said to be the most star-studded Jazzfest to date. It is led by jazz pianist David Benoit who has been in the Philippines a couple of times already. He will also be joined by singer David Pack and Kevyn Lattau who considers Manila her "home away from home."

During the press conference held at the Eclipse Lounge, Solaire Resort and Casino, Pasay City earlier today, January 30, the artists shared how shocked they were when they heard the news about the typhoon in Manila and how bad Tacloban was affected.

Upon watching new reports and videos of the aftermath, Filipino-American saxophonist Michael Paulo called up his fellow jazz artists to ask if they could join him in mounting a benefit concert.

How do they they feel about taking part in a benefit concert for the victims of typhoon Yolanda (international name: Haiyan)?

Pianist Freddie Schreuders said, “It’s an honor and a privilege to play with these artists.”

Nate Phillips of the LA All-Star Band admitted, “When you are brothers and sisters, you just enjoy helping. This is an honor to be here and we’re gonna do our best to throw a wonderful show for a wonderful cause.”

The artists chose to waive their talent fees to serve as donations to the relief efforts of ABS-CBN Sagip Kapamilya and Gawad Kalinga Projects.