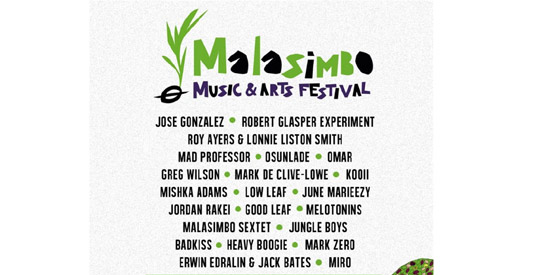 The Malasimbo Music and Arts Festival only made its debut in February 2011 but it has already established itself as the first of its kind and calibre in the Asia-Pacific.

With little fanfare, the festival that debuted to about 1,500 people saw its attendees doubling each year, reaching close to 6,000 people in 2013, drawing both local and foreign tourists to the foothills of Mt. Malasimbo in Puerto Galera for a bit of an adventure and life-changing experience, as most of them would end up describing being there. Now on its fourth year, the numbers is expected to be bigger still.

Described as a passion project by the brains behind the festival, Volume Unit Entertainment–the company that takes care of booking performers, logistic and promotions–holds on to its principles of bringing high quality, mostly soul-jazz-influenced music. The d’Aboville Foundation is Malasimbo festival’s partner in pursuing its advocacies and corporate social responsibility projects for the protection of the environment both land and sea, the preservation of the indigenous Mangyan culture and heritage, the protection of the Tamaraw, Mindoro’s indigenous wild animal species that is fast disappearing, among others.

The organizers, along with the musicians that have graced its stage and the artists whose works have been displayed on festival grounds, work to promote music, preserve Filipino culture and promote tourism in Puerto Galera though the Malasimbo Music and Arts Festival.

Malasimbo Music and Arts Festival has welcomed to its stage artists the likes of New York-based Fil-African American Latin soul musician Joe Bataan, local artists Grace Nono and Bob Aves, to its most “commercial” headliners to date: Jimmy Cliff and Joss Stone, who both performed at Malasimbo just last year.

Volume Unit Entertainment’s Miro Grgic, a Croatian-Australian Musician, Sound Engineer & DJ who came to Manila for a job but ended up pursuing his vision of organizing a world-class music festival here in the country, notes that this year’s lineup “has been regarded by taste-makers as the best lineup to date in Asia, ever."

On its fourth year, Malasimbo Music and Arts Festival 2014 will see on its stage the likes of American jazz, soul and funk legend Roy Ayers, Lonnie Liston Smith (the latter known to many as Miles Davis’ keyboard player); the Swedish indie folk singer/songwriter and guitarist José Gonzáles; American jazz pianist, record producer and Grammy Award winner Robert Glasper; British Neo Soul pioneer Omar, UK's dub legend Mad Professor who has collaborated with the likes of Sade and Massive Attack; the young Australian Jordan Rakei who is often described as a mix of Stevie Wonder, d'Angelo, Bob Marley & Fat Freddy's Drop and many others.

“So far we’ve had about 30 artists exhibiting at Malasimbo ever since Year 1 in 2011. And the family is actually growing,” notes the young Filipino-French artist and designer Olivia d’Aboville, who is actually the director and curator of the arts part of the festival whose own works have been exhibited at the festival.

With art installations described by attendees as inspiring by day and mysterious, even somewhat eerie by night, especially seen in the light of the moon, the works have enthralled those who’ve seen them. From beautiful tree lights made from recycled materials and the twig sculpture of a giant man four meters high by Niccolo Jose, to Billy Bonnevie’s Ifugao-inspired Dap-ay, a ceremonial meeting place with a bonfire at the center, Agnes Arellano’s embedded ground sculpture, Haliya Mantra’s pregnant Moon Goddess, and Gus Albor’s “Presence”, the visual feast only adds to the uniqueness of the Malasimbo Music & Arts Festival.

This year will be no different, promising a glorious display of creative works designed in synergy with nature and the landscape that will take your breath away.

The majestic Mt. Malasimbo, part of a series of mountains of Northern Mindoro, towers over the famed Puerto Galera beach. The festival’s location on the pristine mountainside is, in large part, the source of its magic–the setting overlooks the breathtaking Puerto Galera Bay, one of the only 40 members of The Most Beautiful Bays in the World Club.

“It’s hard to put something superficial in that venue when it’s gorgeous,” Grgic notes. “We’re just visitors to that mountain. So we’re just grateful to have the opportunity to utilize that mountain; make something of it. Malasimbo is a magical experience because there’s something happening there that has nothing to do with us: it’s the place. We are grateful to be able to express ourselves on it.”

The festival’s core ethos is sustainable development. As such, even some of the installations being planned adhere to this, including the Liter of Light, an ecologically and economically sustainable non-electric light source made of bottles with purified water and bleach that refract light into rooms. Plans are also being made for workshops on how to make these lights. The D’ABOVILLE Foundation, which is helping provide electricity to the Mangyan people, is also in talks of developing solar lamp posts that may also be used to light the access road to the festival grounds.

With the aim to keep Mt. Malasimbo clean and green, attendees are encouraged to pick up their trash and plastic cups are pretty much banned at the venue. The organizers are, in fact, studying the possibility of making hard cups that can serve as both souvenir and something people can use during the event. These and other efforts–including the fact that the festival has helped make Puerto Galera a plastic-free municipality–are being put in place by to ensure the sustainability of the land and the festival itself.

To help preserve the indigenous culture of the Mangyan tribes of Mindoro and that of the Philippines, the festival is highlighted by a life-size Mangyan Village exhibit on festival grounds. “I want the people and the Filipino that never seen a Mangyan hut or house to understand how these people live,” says Hubert d’Aboville, president and co-founder of Malasimbo Music & Arts Festival Inc., and president of D’ABOVILLE Foundation & Demo Farm, Inc.

Heritage workshops are also part of the festival lineup, as well as performances from the T’boli people of South Cotabato, Mindanao, showcasing their various traditional musical instruments. T’boli items are also being sold on festival grounds.

Listed on the festival’s website are the different ways that proceeds from the event contribute to the eco-cultural development and sustainability of these tribes, including the preservation of the Mangyan’s traditional poetry and written language.

“I don’t want the (concert) lineup to be why people come at the festival. I want the people to come to festival because of the Malasimbo experience, which is not just the music but the culture, the arts, [and] the environmental part of it,” Grgic says.

This is what truly sets the Malasimbo Music & Arts Festival apart from many others; a distinction that the organizers hope would help push their goal to “position the Philippines as a top destination for festival tourism.” As Tourism Secretary Jimenez says: “Malasimbo, this is where fun rocks in the Philippines.”

Aside from one-day passes, 3-day festival weekend passes are also available through www.malasimbofestival.com and TicketWorld Online.