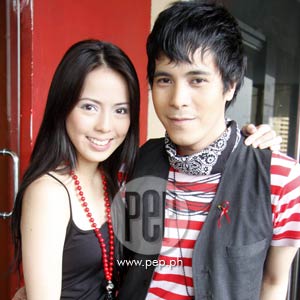 VJs Andi Manzano (left) and Sib Sibulo (right) are among this year's MTV Philippines' representatives leading the information campaign against the dreaded HIV/AIDS.
The country's top acts will unite for an evening of music to help in the fight against a dreaded disease that threatens all people, regardless of culture, social status, age and gender.

On December 12, MTV Philippines will unleash once more the MTV Staying Alive Music Summit for HIV/AIDS at the SM Mall of Asia in Pasay City. This annual music festival is part of MTV's unwavering commitment to empower and educate the youth about the perils of HIV/AIDS, which is a growing problem around the globe.

This time, the campaign focuses on a more practical and responsible approach in fighting the disease.

"This year, we're encouraging people to be more responsible by taking the first step and subject themselves to be tested," revealed MTV VJ Sib Sibulo.

Fellow MTV VJ Andi Manzano seconded: "I think it is important to educate your audience through a more practical and maybe simple method first before thoroughly explaining the details of what we're fighting for."

As expected, more than a dozen artists will be participating to show support to the advocacy. Local artists that are sure to show up include Cambio, Callalily, Barbie Almalbis, Chicosci, The Dawn, Giniling Festival, Day One Movement, Rivermaya, Kjwan, Greyhoundz, Hilera, Hale, Julianne, Out of Body Special, Pupil, Sandwich, Urbandub, Session Road, Sinosikat?, Miguel Escueta, Overtone, Parokya ni Edgar, Pedicab, Sugarfree, Imago, Up Dharma Down, Queso, and Typecast, among many others.

Since 2003, MTV Philippines has been actively leading the crusade in line with the global Staying Alive campaign through the language of music.

The MTV Staying Alive Music Summit for HIV/AIDS is a call for everyone, not just the youth, to take a collective stand against the prevailing lack of knowledge about HIV and AIDS.