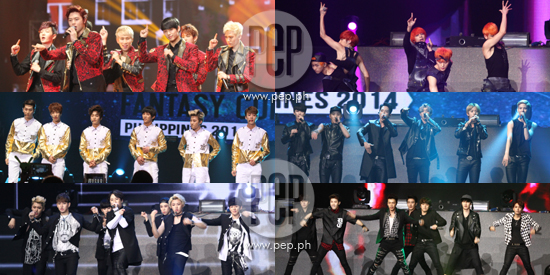 After the successful Dream Kpop Fantasy Concert last January 19, 2013, six all-male idol groups once again shared the spotlight in a follow-up concert featuring the biggest gathering of Korean idol groups in the country.

This year, Super Junior-M, the Chinese sub-unit of Super Junior, topbilled the biggest K-pop festival concert in the country along with A-JAX, A-PRINCE, B.A.P, BtoB, and Block B.

Being the fluent English speaker of the group, Peniel led his teammates in thanking their Filipino fans. “We’re all really grateful to finally be here this 2014,” Peniel told the crowd.

Hyunsik recounted his younger days where he spent some time in the Philippines to study. The 21-year-old singer said that he has always wanted to visit the country to perform live for their Filipino fans.

Hyunsik admitted, “Actually, when I was young, I have been to the Philippines once and I really wanted to come again. And, I’m really glad to be here. Mahal kita!”

Like Hyunsik, Changsub has always wanted to visit the country. The singer explained, “My friends live in the Philippines, so I really wanted to visit.”

During their set, Eunkwang, the leader of the group, thanked fans for their unwavering support. Peniel translated his statement and said, “He wanted me to say to you that while we were in Korea, he heard that Philippine Melodies [fan club name] showed us so much love so we’re very thankful for you guys!”

Before performing their last song, Peniel bid farewell and expressed his hope that they will be able to come back again and perform again for their Pinoy fans. “I hope we can come to the Philippines again, next time.”

BtoB performed their chart-topping hits including “Wow,” “I Only Know Love,” “Insane,” and “Second Confession.”

Before the concert, Hyeongkon revealed that his group prepared a surprise song number for their Filipino fans. He disclosed, “We prepared an English pop song and a song from SS501.”

That evening, Filipino K-pop fans were mesmerized with the group’s performance of Guy Sebastian’s “Angels Brought Me Here.”

Eardrum-shattering screams filled the Big Dome as the band performed SS501’s hit single “Love Like This.” Aside from that, the group also performed their songs “2MYX, ” “One 4 U, ” and “Hot Game.”

Han Seungyeon of KARA made an appearance towards the end of A-JAX’s set. Earlier that day, Seungyeon appeared on GMA-7’s Sunday All Stars to promote Dream Kpop Fantasy Concert 2 and express her gratitude for their fans.

Seungyeon said with the help of a translator, “I’m here in the Philippines for the first time and thank you so much for your love and support.

“I love you so much Filipino fans. Please keep supporting me.”

Through the help of a translator, Taeil said, “This is our second visit in the Philippines. It’s a great honor to be here and meet all the fans.”

One of the members of Block B was celebrating his birthday that night. Kyung told the fans, “Today is our member’s P.O.’s birthday.” Pinoy BBCs (fan club name) wished P.O. a happy birthday as he turned 21 that night.

For the concert, Block B performed their hit singles "Nalina," "Very Good," "Nice Day," and "Be The Light."

B-Bomb revealed at the press conference why "Very Good" was one of their favorite songs. He said, "After our comeback, the song 'Very Good' is our favorite because with this song, we were able to take first place [in the hit charts] for the first time."

“Hello, everyone nice to meet you po,” the members of A-PRINCE said after a few songs.

This is also the group’s first visit to the country. As the leader of the group, 24-year-old Sung Won expressed his gratitude towards their Filipino fans in beahlf of his teammates.

Sung Won said with the help of a translator, “Thank you for being here and for the fans, thank you very much.

“This is our first visit in the Philippines and thank you for the support and love of our fans.”

Known for their cutesy concepts, A-PRINCE charmed their Filipino fans with their performances of "Yes Or No," "Hello," "My Lady," and "Mambo."

Much from their delight, A-PRINCE also performed the dance steps of Bayani Agbayani’s novelty song “Otso-Otso.”

During their set, all of the members greeted their Filipino fans and said, “Nice to meet you!” B.A.P started off with their song “Excuse Me.”

After a few song and dance numbers, Himchan greeted their fans and said, “Kamusta kayo Philippines?”

The singer told their fans that it was their first time to visit the country. However, fans were quick to respond and screamed “No!” because the group visited Manila in January 2012 to shoot the music video for their single “One Shot.”

Aside from “Excuse Me,” B.A.P also performed their chart-topping hits including "Badman," "No Mercy," "One Shot," and "Warrior."

The members of B.A.P also learned a few Filipino phrases that made fangirls swoon. Youngjae made an effort to learn the phrase, “Maraming salamat po!” and Daehyun learned to say, “Mahal ko po kayo!”

Towards the end of their set, Himchan asked their fans to continue supporting their group as they promised to give their best in all their performances. He said, “Please keep supporting and love us. We’ll be trying our best for our special fans.”

Meanwhile, Eunhyun asked their fans, “Did you guys miss me?”

Pinoy ELFs screamed “Yes!” and Eunhyuk replied by saying, “ I missed you!”

Henry said, “I’d like to take this opportunity to thank every who supported me and my solo album.”

Pinoy K-pop fans did not disappoint their idols and screamed their lungs out to show their support for their favorite groups. During their last visit, Henry said that their Filipino fans are the loudest. That night, he noted that Pinoy ELFs are still the loudest fans that they have.

He said, “Thank you guys! I love you guys so much! Still the loudest!”

For the concert, Eunhyuk and Donghae performed their 2012 single “Oppa Oppa,” while Zhoumi performed the ballad song “Distant Embrace.”

Super Junior-M ended the concert with a ballad performance of “Goodbye, My Love” and the upbeat track “Breakdown.”