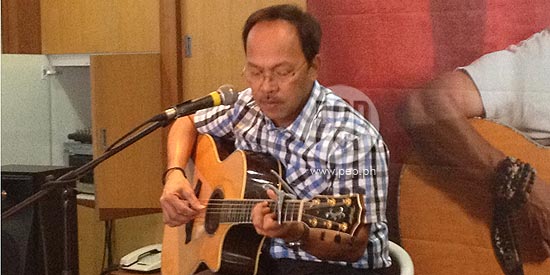 During the February 6 press launch of his fourth album with Universal Records at the Universal Tower in Quezon City, the singer-songwriter recalled where he got his concept for his new album.


The 50-year old acoustic singer decided to release a revival album because he knows that it really is difficult to introduce a new song, especially among today's generation.

“CD is still there but for the young people, no.

“Some of them doesn’t know what CD is, they know MP3 but with the modern technology… you don’t need to come up with an album but yun ang challenge dun, how to create a song parang 'Gangnam Style' inulit niya [PSY] di ba? Pero it’s not as successful pero isa lang yung, pero di ba? Ang lakas lakas.”

Because of these factors, Noel came up with the idea of asking his followers on Facebook to suggest songs they wanted him to include in his album. He was surprised by the numerous requests he received in a span of one week.

He even received weird requests such as Miley Cyrus songs, David Guetta and other songs that are not part of his genre.

He has always wanted to do covers of Aegis songs but he can’t. “They won’t allow, e. I would have included one song,” reveals Noel.

Noel is aware of the challenges facing the OPM industry, especially when it comes to technology since almost everything is now accessible online. Does he find it extra challenging to produce songs that will attract the younger generation who are tech savvy?

“Yes, you really have to promote it. Dapat techie ka you have to devote a lot of time to social networking. Kahit nandyan na siya, you still have to work it, create different versions,” says Noel.

But in spite of all these challenges, Noel’s new album Acoustic Noel is topping music sales charts, proving his bankability as a recording artist.