The Circus Band reunites with the New Minstrels at the PICC 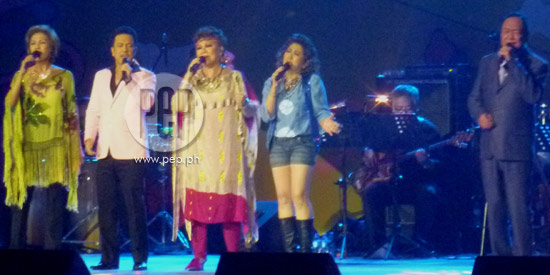 
Back then, the nightclub row (Eduardo’s, The Flames, Rino’s, Wells Fargo, etc.) at old Dewey (now Roxas) Boulevard rocked with their sounds as these groups provided music to hang out with during the late evenings when curfew was still in effect.

The Circus Band, whose members were mostly soloists from the Ateneo University, was founded and managed by Atek Jacinto. They were known for their outlandish costumes and make-up and for their perfect note rendition of multi-genre foreign hits from Motown, Burt Bacharach, Carlos Santana, Barry Manilow and many more. Soon, its members were enticed into going solo, Hadji Alejandro being the first to do so followed by Basil Valdez. It looked like the Circus Band would soon fade into memory. However, thanks to the former members’ individual hit songs, the Circus Band instead passed into legend and even today the band is still fondly remembered.

The New Minstrels, on the other hand, were known for their smooth sophisticated style and songs that alternated between current American Top 40 hits and our native kundiman. Born as an all-male singing group (Eugene Villaluz and Ding Mercado were among its founding members) in the campus of San Beda College, they later decided, as their gigs increased in number and the need for a more varied repertoire arose, to include girls in their line-up. Louie Reyes, a Music Education and Voice student from neighboring College of the Holy Spirit, was among those who joined. As some members began embarking on solo pursuits, the New Minstrels kept up the pace by recruiting new members.

Thus, it was in great anticipation that I watched the We Got The Love, Greatest Hits Reunion Concert of these two bands at the Plenary Hall of the Philippine International Convention Center at the CCP Complex, fittingly along the aforementioned Roxas Boulevard.

The audience that evening was mostly aged 40 to 60-somethings (me included) but I noticed quite a number who weren’t even born during that decade (or even 1 or 2 decades after that, my son Jandy included). The theater took some time to fill up as many arrived late due to the massive Valentine’s Day traffic. Even the performers arrived late, prompting organizers to start an hour late.

Still, we were treated to a sumptuous feast of over 50 tunes, rendered in full or in part (via medleys), of R&B, disco, rock, funk, soul, jazz and pop ballads from the 1970s (minus the bell-bottom pants and flamboyant outfits) interspersed throughout with 1980s originals and the individual members’ own solo hits. Though these singers already are or will soon be senior citizens, for them age was not just a number and, during the show, it was a punch line as they poked jokes delving on their visible wrinkles, creaky joints, high blood pressure and menopause. This self-deprecating way kept things light, breezy, and joyful throughout the show.

As one big musical bunch, all 11 performers opened the show with "Celebration" and "Listen to the Music,” iconic hits of Kool and the Gang and Doobie Brothers respectively. Other songs in the show were then performed either individually, via duets, as a band or as all-female or all-male groups. Individually, Ding Mercado sung "See You There;" Tillie Moreno "Saan Ako Nagkamali;" Eugene Villaluz "Gulong ng Palad;" Pat Castllo "Somewhere in Time;" Joey Albert "Tell Me;" Louie Reyes with Natalie Cole’s "Mr. Melody;" and Chad Borja, a fourth generation New Minstrel, with the Zsa Zsa Padilla original "Kahit Na."

Tillie and Ray An reprised their classic duet with the ethereal "Umagang Kay Ganda," one of the finalists in the 2nd Metro Manila Popular Music Festival in 1979; while Louie and Eugene belted "There’s Nothing I Want More," a Tillie Moreno composition; and Jacqui and Chad brought jazz into the show with the Patti Austin & James Ingram hit "Baby Come to Me."

All 5 Circus Band members then rendered a number of 1970s hits – "The Harder I Try (The Bluer I Get)" of Free Movement, "Touch Me in the Morning" of Diana Ross, "The Right Thing to Do" of Carly Simon, "Betcha by Golly Wow" of the Stylistics (incidentally, also in town doing a Valentine concert) and "Just Don’t Want to be Lonely" of The Main Ingredient.


The 6 members of the New Minstrels followed suit with a marvelous rendition of Burt Bacharach’s and Hal David’s hits – "Whoever You Are I Love You" made popular by Burt Bacharach himself; "Promises, Promises," "Make it Easy on Yourself" and "I Say a Little Prayer" by Dionne Warwick; "(They Long to Be) Close to You" by The Carpenters; and "This Guy is in Love With You" by Herb Alpert.

Then, all the 6 male members of both groups rendered a medley of Stevie Wonder’s most commercially successful singles – "My Cherie Amour," "Too Shy to Say," "All in Love is Fair," Goodbye," "You are the Sunshine of my Life," "Superstition and I Just Called to Say I Love You." They all (except Basil, I wonder why) exited the stage ala Stevie Wonder – wearing dark sunglasses and with their left arms on the other’s shoulders.

The girls were not to be left out as they also banded together, at the show’s seeming finale, to wow the crowd into a frenzy with the 1978 disco hits "I Love the Nightlife," an Alicia Bridges original; "Shake Your Groove Thing" of Peaches & Herbs; Boogie Oogie Oogie, a Billboard Top 100 chart topper of Taste of Honey; and Last Dance, the hit song of Donna Summer; plus "No More Tears (Enough is Enough)," a 1979 Barbra Streisand/Donna Summer duet; and "I Never Can Say Goodbye," a 1971 Jackson 5 original.

However, the appreciative crowd just wouldn’t allow the performers to end the show without an encore, and all 11 performers responded, with the crowd already on their feet and dancing, with a mélange of Earth, Wind & Fire classic songs –"September," "Let’s Groove" and "Boogie Wonderland."

We all came here to reminisce and we left the PICC not a bit disappointed as we were able to indulge ourselves to a nostalgia trip featuring a bevy of oldies but goodies showcasing the versatility and genuine talent of Filipino music acts of the 1970s.


Here’s hoping that this wouldn’t be the last Circus Band and New Minstrels reunion.