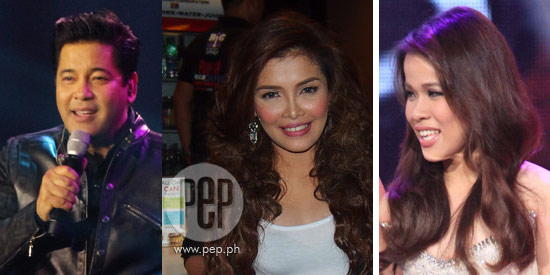 Martin Nievera, KZ Tandingan, and Klarisse De Guzman performed for the Valentine Concert at the Gardens held in Makati City.

The fourth Valentine Concert at the Gardens showcased a fantastic repertoire consisted of some of Martin’s greatest love themes such as “Ikaw ang Pangarap,” “Be My Lady,” and “Kahit Isang Saglit.” It also featured the Concert King’s rendition of classic hits originally interpreted by other noted singers such as Ariel Rivera’s “Ikaw,” and Joey Albert’s “Ikaw Lang Ang Mamahalin.”

All of Martin’s song numbers were highly applauded, but his medley of well-loved Stevie Wonder and Frank Sinatra songs turned out to be the crowd favorite. Who wouldn’t swoon over these popular tunes: “Isn’t She Lovely,” “My Cherie Amour,” “Overjoyed,” and “I Got You Under My Skin?” Together with his guest female artists, Martin also sang “Forever,” “When I Fall In Love,” “How Do I Keep the Music Playing,” and “After the Love Has Gone.”

Guest performers KZ, Allen, Klarisse and Morissette added energy and vibrancy to Martin’s show with their individual evocative numbers, highlighting pop hits such as John Legend’s “Ordinary People,” Angela Bofill’s “Tonight I Give In,” Michael Bolton’s “To Love Somebody,” and Beyonce’s “Love On Top.” Among these four young belters, it was Morisette who brought the audience to their feet.

Another scene stealer during the concert was Ireland-based disc jockey/producer Ryan Gallagher who wowed the audience with his soulful version of Martin’s “Kahit Isang Saglit.”

In between his powerful performances and comedic antics, Martin took time to find ideal kissing couples and eager singer wannabes in the audience to reward them with a brand new Swatch watch.

The night was capped by a bravura performance of Martin and the talent search big winners, certainly a more poignant take on David Guetta’s “Without You.”

Held at the Ayala Triangle, the Valentine Concert at the Gardens is a great venue for lovers from all walks of life to celebrate the much-awaited season of hearts with the lush gardens as backdrop. To provide couples a more memorable Valentine experience, the organizers mounted a huge Valentine’s arch for a unique photo op and special booth for sweet treats.

Valentine’s Day Celebration in Makati is part of its "Make It Happen. Make it Makati" campaign. For more information, visit www.makeitmakati.com.