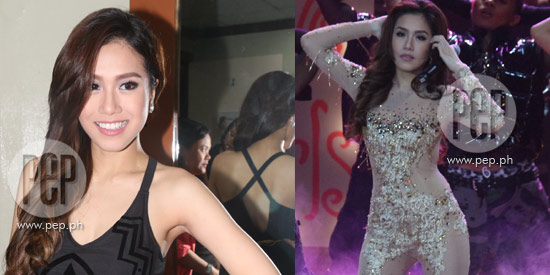 Rachelle Ann Go wore a shimmering sequined cat suit in the opening number of her send-off concert at the Meralco Theater. “All of us have created a movie in our minds–and it represents our dream that we want to come true. Let’s make this dream into a reality,” said an emotional Rachelle Anne Go towards the end of the event, which also marked her 10th anniversary concert.

The singer-actress is slated to portray Gigi Van Tranh for West End’s upcoming revival of the legendary musical Miss Saigon.

During her concert, Rachelle Ann performed an interesting mix of songs from various genres, which aptly summarized her first decade in the local entertainment industry. In her opening spiel, the young pop diva admitted that her concert was both a look back into her colorful past and a sneak peek into her exciting future.

To cue the crowd on her trip down memory lane, Rachelle Ann performed “Through the Rain,” which according to her was her winning piece in 2004’s Search for a Star and also the “song that started it all.”

Another segment to remember was the highly applauded OPM medley performed by Rachelle Ann’s fellow talent show alumni Mark Bautista, Erik Santos, and Christian Bautista. This highly amplified number brought back classic ballads composed by George Canseco such as “Muling Buksan ang Puso,” “Gaano Kadalas ang Minsan,” “Kastilyong Buhangin,” “Sa Dulo ng Walang Hanggan,” “Kastilyong Buhangin,” and “Ngayon at Kailanman,” among others. After the medley, Rachelle Ann thanked the guest balladeers for gracing her concert for free, as well as for the great friendship they have shared for years.

The former Search for the Star grand champion acknowledged the presence of close friends including Pinoy Big Brother housemate and suitor, Slater Young.

However, the crowd cheered louder for her heart-wrenching duet with ex- boyfriend Christian for the song “Say Something.” 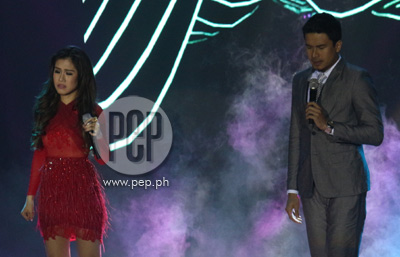 
The GMA-7 artist also thanked her brother Oz, who happens to be the designer of all her fashionable outfits for the night.

Rachelle Ann also performed “What Kind of Fool” with Erik Santos, who was her co-star in Atlantis Production’s staging of The Little Mermaid. After their soulful number, the two found themselves reminiscing about the theatrical debut they made in 2011 and aptly segued to Rachelle Ann’s poignant rendition of “Part of Your World.”

The appearance of Asia’s Songbird Regine Velasquez during the send-off concert proved that it was not just about remembering the past, but also the expression of gratitude to people who have helped Rachelle Ann rise to fame and become the versatile artist she has always wanted. 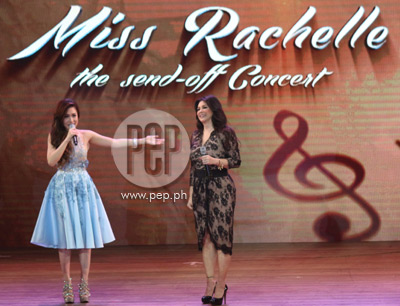 
Regine, who is a major influence in Rachelle Ann’s life, gave a haunting performance of “Kung Maibabalik Ko Lang” and “Babalik Kang Muli” with her young protege. Their seamless blending left the audience in awe.

When asked what advice Regine wanted to give to Rachelle Ann, she jokingly replied, “Wala naman.” She turned serious when she lovingly told the young singer, “Just enjoy your journey and make sure to have a great time.”

The Kapuso singer confessed that being a theater actress was not her childhood dream, but God led her to this awesome opportunity and she wants to make the most out of it.

“All of us have created a movie in our minds – and it represents our dream that we want to come true. Let’s make this dream into a reality,” an emotional Rachelle Ann told the crowd before singing a medley of songs from popular Broadway musicals: “Movie in My Mind,” “I Dream A Dream,” “On My Own,” and “Memory.”

Directed by Homer Flores, the send-off concert ended with Rachelle Ann’s expression of gratitude for all the people who made it to her concert and a special request for prayers that will guide her through her Miss Saigon journey.