Urbandub reenters the recording scene with "Under Southern Lights" 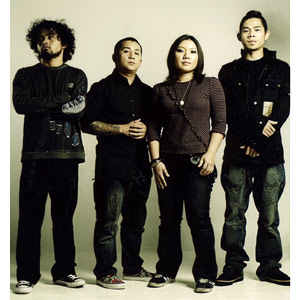 Describing Urbandub's experience in recording their latest effort, Under Southern Lights, frontman Gabby Alipe said: "The recording was a great learning experience for the band. It was our first time to record with 2-inch tape rather than digitally, which we were used to when we were still recording in Cebu."
Cebu based band Urbandub has always been an anomaly in a music business dominated by pop-rock acts churning catchy tunes for maximum mass appeal. To make things even more complicated, chief songwriter Gabby Alipe is not known to write songs in the vernacular—considered by many insiders as a sure kiss of death, commercially speaking.

But all these hurdles are surmounted by the quartet of Gabby (vocalist), Lalay Lim (bass), John Dinopol (guitar), and Janjan Mendoza (drums). After three successful albums, Urbandub is back with their fourth album titled Under Southern Lights under EMI Philippines.

Urbandub's last album, Embrace, only cemented the band's mettle as evidenced by the overwhelming reception it received from listeners and fellow musicians.

"That album was written during a very dark time for the band, individually we were going through a lot during the creation of that album," Gabby revealed to PEP (Philippine Entertainment Portal) during an interview last November 22 at the EMI office in Quezon City.

Despite its dark vibe, the listeners identified with Gabby's desperate lyrics, not to mention passionate delivery, with the combined sound of the band providing every song the emotional catharsis to stab the message across.

HELTER SKELTER. Life for the band during Embrace's promotion can be described as crazy and exhilarating at the same time.

That collective experience plus personal issues are once again channeled creatively. Mixing everything down resulted in Under Southern Lights.

Typical of the band, Alipe said that for this latest effort, Urbandub consciously pushed their limits to offer something new.

"We also tried to write songs far from the specific genre our fans are used to hearing from us," said Gabby. "Musically, we challenged ourselves creatively like when it comes to the riffs, melodies and beats."

The band stayed in Cebu for two months just to lay down the lyrics and the basic melodies before flying back to Manila to fine-tune the songs in preparation for the actual recording. This also marked the band's first time to record an entire album outside their hometown.

Working with Angee was a lot of fun according to all members. "We were intimidated at first," Gabby recalled, "but eventually una lang ‘yon and we had a great time working as well as learning under his guidance.

For its first single, the band and EMI chose "Guillotine." Pancho Esguerra directed the video, which perfectly captures the song's message of hurt and rejection.