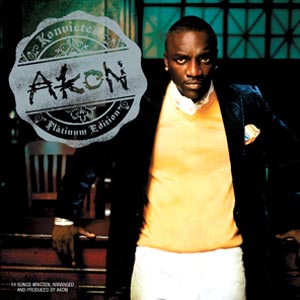 International R&B artist Akon (in photo) visits Manila to perform his famous songs like "Smack That," "Don't Matter," "I Wanna Love You," and his latest single, "Sorry, Blame It On Me."


Rumors have reached PEP (Philippine Entertainment Portal) that the concert of the international hip-hop artist has been cancelled because of the coup attempt that took place in Makati earlier today.

But PEP proved this rumor untrue. In fact, a few hours before his concert at the Araneta Coliseum tonight, November 29, Akon faced the media for a brief talk at the Discovery Suites in Ortigas Center.

During the meet-and-greet, Akon was also given a platinum award for his album Konvicted by MCA Music while The Philippine Hip-Hop Awards acknowledged him as the International Artist of the Year for 2008.

Akon popularized the hit songs like "Smack That," "Don't Matter," "I Wanna Love You," and his self-composed single "Sorry, Blame It On Me." The last song was actually one of the bonus tracks that was included in the Platinum Edition of the originally 15-track album.

In this album, Akon collaborated with prominent U.S. music artists including Gwen Stefani who sang with Akon in "Sweet Escape," and Eminem who showed his aggressive rhymes in the first single titled "Smack That." Akon also did a song with fellow hip-hop artists like Snoop Dogg for the sexy ditty "I Wanna Love You," as well as Bone Thugs and Harmony for the song "I Tried."

During the press conference, Akon humbly said that he has worked with a number of famous music artists in the United States but he would be glad to collaborate with Beyoncé in his future projects. Beyoncé also visited the country earlier this month.

The international artist is also open to the idea of working with Filipino hip-hop artists in the future.

But before his grand entrance in the closely monitored house, feel the smooth groovin', movin' and singin' as Akon performs his top hits for viewers tonight at the Araneta Coliseum.