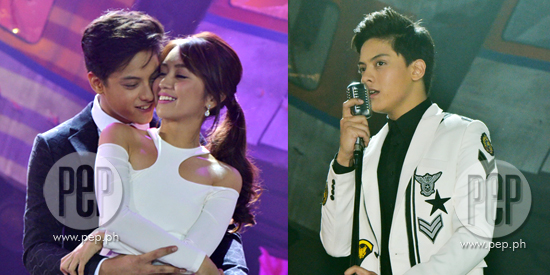 One of the highlights of Daniel Padilla's concert is his sweet dance (left photo) with perennial leading lady Kathryn Bernardo. The 20-year-old actor-singer's (right) most applauded performances include his version of "It Might Be You," "Everything," and "Ligaya." DJ's message for his fans: “Sa lahat ng nag-ipon, sa lahat ng ‘di kumain para may pambili ng ticket, magiging inspirasyon ko po kayo.”

A few weeks before his birthday concert, Daniel Padilla admitted to PEP.ph (Philippine Entertainment Portal) that singing is not his strong suit. But he vowed to give his fans a run for their money by turning on his charm full blast. Based on the deafening shrieks of the crowd from start to finish, the actor dubbed as ABS-CBN’s teen king delivered.

No seat was left unoccupied at the Smart Araneta Coliseum for Daniel’s DOS (Daniel on Stage) concert. Fans kept cheering wildly way before he entered the stage few minutes past 8 p.m.

At which point, Daniel got the party started with his first album’s hit single, "Nasa Iyo Na Ang Lahat", followed by a '90s OPM song, “Yugyugan Na.” In that opening set, he established the concert flow, which alternately featured rock and kilig love songs.

Daniel pulled off enjoyable performances of a repertoire that best showcased his singing voice—Michael Buble’s "Everything", the Beatles’ "Something", Black Crowe’s "Hard To Handle", Eraserheads’ "With A Smile", and "The Way You Look Tonight."

When they performed “Teacher’s Enemy Number 1,” Daniel happily tinkered with his bass guitar while JC did most of the vocals. “Gwapo [si JC] ‘di ba? Pero mas gwapo ako,” the 20-year-old jokingly exclaimed after the number.

The audience also did rock and roll with Daniel and Khalil Ramos’ rendition of Rivermaya’s “Liwanag Sa Dilim.” Fans either sway with the music or sing the familiar lines of the song.

HIGHLIGHTS. For the next number, Daniel introduced a special guest whom he looks up to in the local music scene.

They performed a striking duet of another Rivermaya song, “Umaaraw umuulan.” Afterwards, Daniel went backstage to change his outfit as Rico tackled some of his hit songs such as “Sulong,” “Awit Ng Kabataan,” “Liwanag Sa Dilim,” and "Hinahanap-Hanap Kita."

Another special guest of Daniel at the concert was Toni Gonzaga, who was thrilled to be part of what she called “The Daniel Padilla fever.”

The Pinoy Big Brother host further said that she can’t blame the fans for being so “addicted” to Daniel because of his undeniable appeal.

“So in behalf of all of you, ako na lang ang gagawa! Sorry this is my chance.

Fans also got to see a glimpse of Daniel’s closeness with his mom, Karla Estrada. While they were singing “In My Life” from his third album, Daniel kept ribbing his mom for not being mindful of their vocal harmonies.

Nevertheless, Daniel’s love for his mom is evident with the way he hugs her tightly during their production number.

Afterwards, Richard Yap a.k.a. Ser Chief—who seemed a bit out of place in the concert—performed James Taylor’s “Whenever I See Your Smiling Face.”

LOVE TEAM. But perhaps the most-awaited part of the concert was the segment wherein Kathryn Bernardo finally joined Daniel on stage.

Wearing a long-sleeved backless gown, Kathryn was playing coy as Daniel serenaded her with Paul Anka's “Put Your Head On My Shoulders.”

At the end of the song, Daniel thanked her for being part of his birthday concert.

The reel and rumored real-life couple also did a duet of Got To Believe, the theme song of their recently-concluded ABS-CBN primetime soap of the same title.

As if that’s not enough, Daniel serenaded Kathryn again with a kilig rendition of the popular love song, "It Might Be You."

Only then did Daniel let her go backstage.

SOLID FANBASE. At the latter part of the concert, Daniel expressed his heartfelt gratitude to his avid fans who never fail to show their love for him.

Then he performed his finale songs including “Next In Line,” “I Heart You,” and Eraserhead’s “Ligaya.”