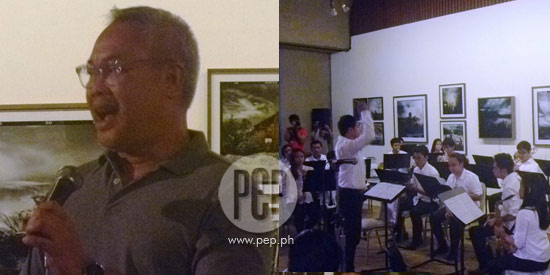 The CCP Orchestra and Band Festival will be held from July 1-6, 2014 in venues all over the Philippines. Photos show CCP Vice-President and Artistic Director Chris B. Millado (left) and the UST Wind Orchestra.

The first week of July promises to be a week of symphonic sounds as the Cultural Center of the Philippines (CCP) presents the Orchestra and Band Festival, a continuing project of past CCP festivals that seeks to provide opportunities for various orchestras and symphonic bands in the country that are deserving of proper exposure.

In a presscon held at the CCP, after welcome remarks by CCP Vice-President and Artistic Director Mr. Chris B. Millado, Assistant Festival Director Prof. Herminigildo Ranera gave the press an overview of the upcoming orchestra and band festival. Members of the media were also given a sampler of what to expect with a command performance by the 65-member University of Sto. Tomas (U.S.T.) Wind Orchestra, conducted by Prof. Michael E. Jacinto, rendering the Procession of Nobles (by Nicolas Rimsky Korsakov) and Disney’s Fantillusion (arranged by Takashi Hoshide).

Performances for the next four days (July 2 to 5), by select bands invited from all around the country, will be held at the CCP Little Theater (Tanghalang Aurelio Tolentino).