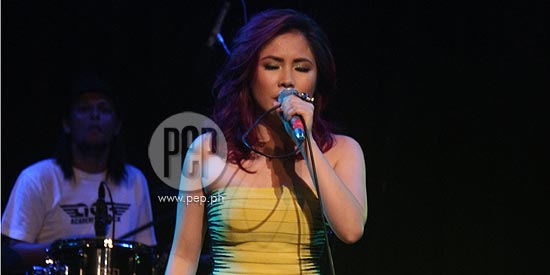 Academy of Rock (AOR) Philippines staged the We Are Youngbenefit concert last June 7 at the Music Museum, San Juan City. AOR’s Ambassadress Yeng Constantino (in photo) took the stage as she and AOR turned over their cheque donations to Bantay Bata.

Opening with a presentation for ABS-CBN’s Bantay Bata Foundation, the event promoted AOR’s Outreach Program for 2014 which included their sophomore album, The Next Step Vol. 2. As part of their Corporate Social Responsibility, the slogan “Lend Us A Hand, Give Them A Hope” was adopted and all proceeds for the album and 50% of the concert’s ticket sales were donated to Bantay Bata.

The first performance for the night featured 2 of the 5 girls who are part of The Next Step Vol. 2: Ruth Ann Lee and Chloe Villaret. They sang No Doubt’s “Just a Girl” before they were joined by 2 more girls, Kelcey Palileo and Carmela Nina Gonzalez. Unfortunately, their 5th collaborator, Nicki Lucido, was not feeling well for the event. Together they sang “People Say,” which is one of the songs from album.

Singer Markki Stroem was one of the hosts for the night and introduced the succeeding performers. First up were students from Academy of Rock Rockwell singing Snow Patrol’s “Chasing Cars.” They were followed with a band performing Natalie Imbruglia’s “Torn.”

The first dance number of the night focused the spotlight on 8-year-old Matthew who entertained the crowd with “Get Down,” “Ice, Ice, Baby,” and “Thriller.”

The Academy of Rock also raffled items to the audience, which was comprised mainly by parents of the AOR students as well as special guests from AOR Singapore. Yengsters, AOR Ambassadress’ Yeng Constantino’s fan club, were also present. The first set of vouchers raffled were for free drum lessons.

AOR Philippines continued with covers of popular songs such as “I Love Rock and Roll,” “Ironic,” “Apologize,” and “You Give Love a Bad Name.” The second dance number for the night had Korean songs, “Wedding Dress” and “Mama.”

The succeeding production numbers showcased how you can perform no matter your age: from 8-year-old kid drummers to AOR’s older students to the AOR Singapore faculty who performed as the band for Yeng Constantino’s set.

Kelcey Palileo performed “Reach for the Sky,” a song from The Next Step Vol. 2 album, as the culminating song of the night for the students.

Yeng then rocked the stage by performing “Seenzoned,” which is the carrier single of The Next Step Vol. 2.

Special guest, Erik Santos, sang Miley Cyrus’ “The Climb” before being joined onstage by Yeng for a duet of R. Kelly’s “I Believe I Can Fly.”

For the finale, the Academy of Rock Philippines faculty performed “Beat It” and the theme song of the night, Fun’s “We Are Young.”

The Next Step Vol. 2 is sold at all AOR Philippines (The Fort and Rockwell outlets) and Singapore outlets, as well as the Bantay Bata Foundation for only P150.