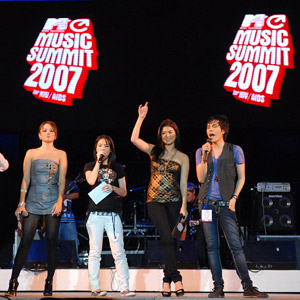 Now on its fifth year, the highly anticipated concert for a cause once again gathered the country's top acts, not just to rock the night away, but also to spread the message of safe sex and to encourage everyone, particularly the youth, to help prevent the spread of the dreaded disease.


AIDS (Acquired Immune Deficiency Syndrome) is caused by the human immunodeficiency virus (HIV) that is transmitted through sexual contact or blood transfusions.

To accommodate over 40 musical acts invited to perform that day, the gates officially opened as early as two in the afternoon, giving the audience a chance to check out all the sponsors and non-government organization booths situated around the vast area—all with the mission of spreading information about HIV and AIDS.

Resorting to a more practical solution, MTV Philippines encourages everyone to get themselves tested against the disease that has no cure yet.

BIGGER AND BETTER. Still gasping for breath, Sandwich bassist Myrene Academia pointed out that the MTV Music Summit gets bigger every year.

"Padami nang padami 'yong mga tao which is good considering that this is for a cause and not just a plain concert na madaming bands. If you have something important to say and you're able to gather this huge [number] of people, that's a good sign," he said.

Aside from regular performers, there were also those experiencing the musical extravaganza for the first time, like pretty VJ Andi Manzano.

"I'm having a great time," Andi confided to PEP (Philippine Entertainment Portal) backstage. "But other than that, I'm glad a lot of people supported this worthwhile endeavor and really took time out to attend and listen to what we are trying to say."

MTV Philippines's objective is to educate its viewers and target the youth through the language they'd most likely to listen to—music.

This year, the bands that participated include underground darlings Brigada, The Out of Body Special, Day One Movement, Giniling Festival, Up Dharma Down, Radioactive Sago Project and Gayuma, among others.


Local celebrities Ping Medina, Karylle, Guji Lorenzana, and Andrea del Rosario also joined the VJs to offer their own messages for the youth.


The event, which lasted well until 2 a.m., ended with Jamir Garcia of Slapshock joining the Greyhoundz. Jamir's band has just celebrated its 10th anniversary this year and had earlier released a compilation album titled Recollection. Greyhoundz also marked its first decade in the music industry this year.

STAYING ALIVE. Cynics may express doubts on whether the medium chosen by MTV is indeed effectively transmitting the message in the midst of chug-chugging guitar riffs, pounding drum rolls, and a sea of kids sacrificing their physical comfort inside the cramped mosh pit.

Sandwich and Chicosci axeman Mong Alcaraz thinks that the message mixed with the usual ritual of a rock n' roll show is just fine.

"Oo naman," he exclaimed, "I'm sure they know why they're here for and they know what MTV and the artists here tonight are saying."

Aside from the roster of talented and diverse artists, the 2007 MTV Music Summit also witnessed a homecoming of sorts for former VJs Marc Abaya and Sarah Meier. The two mixed it up with the new batch of MTV jocks composed of Kat Alano, Anne Curtis, Victor Basa, Andi Manzano, Sib Sibulo and Maggie Wilson.

"Nice to be back, at least for one night," Sarah beamed. "Music Summit is still crazy, fun and very inspiring and I think it's more organized now," she laughs.

The MTV Staying Alive Music Summit for HIV/AIDS is part of MTV's global Staying Alive campaign, which aims to empower the youth to protect themselves, fight stigma and discrimination and engage businesses, media and organizations to form their own response to HIV/AIDS.