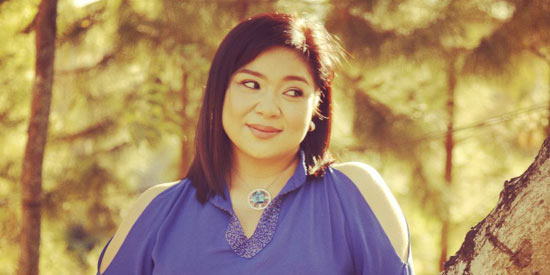 Marissa Sanchez returns to the recording scene via her new album titled Slowing It Down. Watch her perform on August 28 at Centerstage, Tomas Morato and at the Area 05 Events Place on October 29.

Marissa Sanchez marks another milestone in her career with the launching of her album titled Slowing It Down.

Though recognized more as a comedienne, actress and host, the evolving artist has been yearning to use her singing talent to share her faith and life story and eventually inspire her listeners.

Released under the Universal Records label, and with her close friends as executive producers, the album features English and Tagalog revivals and an original composition by Elmer Blancaflor titled “Eighteen.” Blancaflor also composed “Panghabang Buhay” and “Pag-Ibig Ko'y Pansinin,” which were originally sung by Faith Cuneta as well as Jessa Zaragoza and Dingdong Avanzado, respectively.

The track listing includes “Panghabang Buhay,” “Pag-Ibig Ko'y Pansinin,” “You and Me Against the World,” “Kailan Sasabihing Mahal Kita,” “Help Me Forget,” “Eighteen,” “It Takes Too Long,” “Dindi,” “Sunlight” and “Sometimes.”

In more ways than one, the album title represents a literal slowing down for Marissa. In keeping with the album's mellow and relaxed vibe, the CD packaging concept resembles a coffee table booklet where she shares tidbits about random acquaintances, friends, colleagues and supporters since way back.

Marissa explains, “It pertains more to my choice of songs and my persona. I used to be very loud, and my songs were throat-smashing (birit) songs.”

Not exactly her debut effort, Slowing Down marks her first “serious” musical foray, fourteen years after a regrettable novelty record.

With her showbiz and stage experience, it's not surprising how Marissa made such a powerful impact on her audience during her heyday. Aside from her stints with Repertory, Villa Teatro and Dulaang U.P., she was also paid her dues in numerous bands and other professional stints since the '80s.

Through the years, she remains a loyal fan of Barbra Streisand, as well as prolific stage actress Pinky Amador. All throughout her colorful showbiz career, she also nurtured friendships with fellow singers such as Jessa Zaragoza who to this day ranks among her closest friends who has been generous with her moral support.

Marissa reveals how she got over her “birit phase” after watching one of Pinky's performances.

She recounts, “That's where I realized that singing at the top of your lungs doesn't make you a great singer. It was how she delivered. That eventually inspired me to rethink my whole approach to singing.”

Exuding a sense of peace and inner calm, Marissa speaks with much conviction about her faith. Her never-ending search for spirituality and truth eventually led to her conversion to the Foundation Fundamentalist Baptist Church, where she found the answers to many pressing questions.

She muses, “The primary reason I do want to bid green jokes goodbye is my faith. Continuing to be vulgar doesn't help me grow as a Christian. If I do this, I can draw people nearer to Christ, the source of all, and not to worldly things. And with the good Lord's gift of song, I can use this as an instrument to inspire with the guidance of my Mom's teachings.”

Now peacefully married, the proud mom strikes a healthy balance between family life and doing her corporate gigs. Visibly slimmer and healthier, the youthful-looking Marissa seems to be living a more purposeful and meaningful life.

Asked to name her favorite song, she quips: “’Smile.’ The song says it all!”

In line with her album launch, Marissa will have a pre-launching event on August 28 at the Centerstage, Tomas Morato. A grand launch show is also scheduled to take place at the Area 05 Events Place on October 29, which starts at 7:00 p.m. Tickets are priced at P1,000.