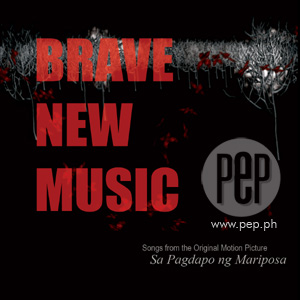 
Following the success of its debut film Compound, HUBO Productions Inc. does a first in independent cinema circuit by embarking on a search for fresh music to complement its second offering. The result is the soundtrack BRAVE NEW MUSIC: Songs from the Original Motion Picture Sa Pagdapo ng Mariposa.

The soundtrack includes songs from a recently held contest wherein musicians submitted entries. A diverse mix of pop, rock, world, rhythm and blues, and metal was selected from more than 200 entries coming from the Philippines (Manila, Bacolod), Japan, and the United States.

Bar favorite VerseS performs the carrier single "Home," a song about personal struggles and the desire to seek shelter and security.

Three tracks were specifically written for the movie based on the theme posted in the competition mechanics—"Caregiver" written by Ryan Bobis Villena and performed by Area 5, "Di Kita Iiwan" written by U.S.-based Filipino Ferdz Din and sung by Australian-American Elin Jr, and "Let's Play" written by Marq Dollentes together with soul/R&B singer Keith Martin who performed it with talented female vocalist Isabella.

Underground metal act, Intolerant, and one of Bacolod's pride, 4WD, round up the list.

Below is the track listing:

3. Tara by The Rinka Collective